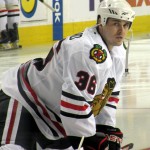 Dave Bolland, a forward for the Chicago Blackhawks, appears to be the latest professional athlete to make a questionable decision on Twitter. What did he do? Well, he apparently retweeted a tweet from a fan who was calling for the death of NHL commissioner Gary Bettman, who has long been the target of fans’ ire, especially given the current lockout.

According to ESPN, the retweet was deleted, but the message was “can I get a RT for wanting Bettman dead?”.

Fans and players alike are clearly frustrated with the lack of hockey, but you still have to keep it civil. Forget wanting Bettman dead, the NHL just needs to be brought back to life. Unfortunately, that may not happen this year, given the NHL’s most recent round of scheduling cancellations, which included the All-Star Game and all games until December 14th.