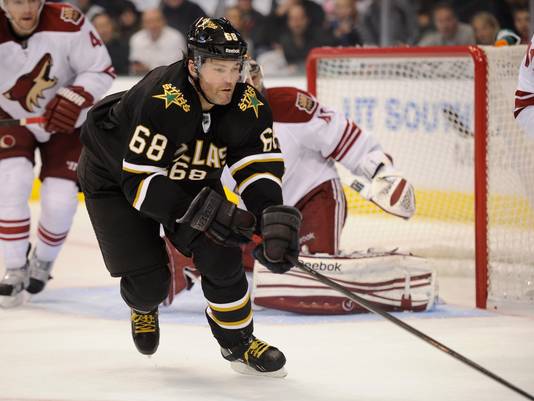 Before signing with the Dallas Stars prior to the 2013 season, Jaromir Jagr had never played for a Western Conference team in his entire 20-season NHL career. His stay didn’t last long. After only 34 games with the Stars, he was dealt back to the Eastern Conference, in a trade that will send the 41-year-old right wing to the Boston Bruins in exchange for two prospects and a draft pick, according to ESPN. The prospects and the pick have yet to be disclosed, and such information will be updated as it becomes available.

Dallas’ fading playoff hopes, following a 4-0 drubbing at the hands of the Anaheim Ducks that left the Stars in 12th place in the West, was a likely motivating factor in the trade. This move comes shortly after the Stars traded away Brenden Morrow and Derek Roy, strongly indicating that the Stars are entering a serious rebuilding mode.

With Jagr, the Bruins get the veteran scoring forward they thought they had gotten in Jarome Iginla, before a late-night decision by Iginla sent him to the Pittsburgh Penguins (Iginla refused to waive his no-trade clause for Boston). Jagr was the Stars’ leading scorer this season, having notched 14 goals and 26 points. He is eighth all-time in total points with 1,679, and 10th all-time in goal scoring with 679. The Bruins are his sixth NHL team, following stints with Pittsburgh (1990-2001), Washington (2001-2004), the New York Rangers (2004-2008), Philadelphia (2011-12) and Dallas (2013).