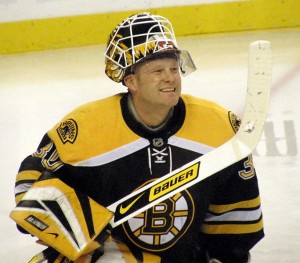 According to reports, the Boston Bruins have traded the two-time Vezina Trophy winning goalie Tim Thomas to the New York Islanders. In exchange, the Islanders will give Boston a conditional second round pick in either the 2014 or 2015 draft.  Thomas, 38,  is currently retired, but is considering coming back after spending a year away from the NHL.

Boston had has plenty of success replacing Thomas this year. Tuukka Rask has stepped in and performed admirably, winning six of his eight starts with a .922 save percentage and a 1.96 goals against average. They also have AHL standout Anton Khudobin (1-0 this year) backing Rask up, and have top prospect Malcolm Subban waiting in the wings. Suffice it to say, the Bruins felt comfortable dealing away Thomas. However, Thomas’ $5M cap hit remains on the Bruins’ payroll this year.

The Islanders potentially get one of the league’s better goaltenders, but only if Thomas wants to come out of retirement. Their goaltender situation is currently (and seemingly always) in a state of flux, as they’ve got 37-year-old Evgeni Nabokov (4-3-1) as the starter, and oft-injured and former No. 1 overall pick Rick DiPietro as the backup. Thomas would only be a temporary solution for a team that’s not exactly ready to “win now”, and would probably be better off seeing what some of their young goaltender prospects can offer them for the future. New York’s top netminding prospects are Anders Nilsson and Kevin Poulin, rated 7.5 and 7.0 out of 10, respectively, by Hockey’s Future.