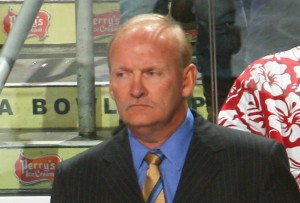 Lindy Ruff was relieved of coaching duties after 16 years behind the bench in Buffalo. Image Credit: Rick Stewart, Getty Images

For the first time in 16 years, the Buffalo Sabres will have a new head coach. Following the team’s dismal 6-10-1 start to the 2013 season that left them third last in the Eastern Conference and dead last in the Northeastern Division, Ruff was relieved of his duties. Ron Rolston, head coach of the Rochester Americans (Buffalo’s AHL affiliate) has been named interim head coach for the rest of the year.

Ruff leaves the Sabres as the winningest head coach in franchise history. He posted a 571-432-162 record in his time as Buffalo’s bench boss, with one trip to the Stanley Cup Finals (1998-99), one President’s Trophy (2006-07) and two division titles (2006-07, 2009-10). He also won the Jack Adams Award in 2006, which is the NHL’s highest coaching award. He was the longest tenured coach in the NHL before his firing; that title now belongs to Barry Trotz, who has coached the Nashville Predators since their inception in 1997. Trotz was hired a mere two weeks after Ruff.

Rolston is relatively new to the pro hockey coaching circuit, but that kind of fresh blood may just be what the Sabres need to turn things around. Rolston’s only pro hockey coaching experience has come in the last two years, both spent behind the bench coaching the Rochester Americans. His first year Rochester finished last in the North Division, but enjoyed a massive improvement during Rolston’s second year, when they finished second in the division and made the playoffs.

It’s been sixteen years since the Sabres were coached by anyone besides Lindy Ruff. When Buffalo takes on the Toronto Maple Leafs tomorrow, it truly will be the dawning of a new era for Buffalo hockey.