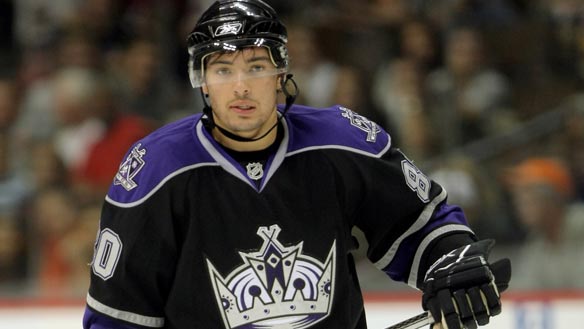 When you talk about greedy players, there a few things to keep in mind:

A) The player might be making a very important decision in his career, so from the outside looking in, he may appear to be greedy.

B) The player may have already chosen to settle a deal, and is waiting for the proper time to announce it, thus giving him the appearance of greedy.

C) He may not actually be a greedy person, but it’s just that time of the month and he’s just in a greedy mood.

None of the above applies to Los Angeles defenseman Drew Doughty.

For those of you who don’t know, Doughty became a restricted free agent at the end of last season. Being one of the NHL‘s top defensemen, and easily LA‘s number one defenseman, you would think that the guy would receive a pretty decent pay raise in his next contract, and you would think that LA, a team ready to dominate the Western Conference next season, would want their number one defensemen all signed up to start the training camp right? …Right?

Well, it’s September. The leaves are starting to change and all 30 NHL teams are breaking out the skates and starting training camp. However, if you went to Los Angeles right now and looked for defenseman number 8, you wouldn’t find him, because he’s not there.

It turns out that not being signed to a contract means you don’t have to play hockey for you team. Nope, Mr. Doughty is sitting at home 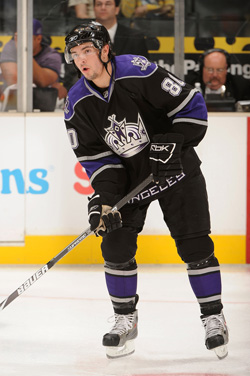 probably enjoying re-runs of Two and a Half Men or the Sopranos, maybe checking up on the latest Jersey Shore episode. No, Drew Doughty is no where to be found and that is a problem for Kings fans.

Kings GM Dean Lombardi is saying all the right things. He continues to work towards signing his franchise defenseman to a long term deal, and continues to work with Doughty‘s agent Don Meehan to work out a deal as quickly as possible. It’s probably important to note that Dean Lombardi and Don Meehan have butted heads in the past over, guess what, players holding out on signing their contracts. Back when Lombardi was the GM for the San Jose Sharks, Meehan held franchise goaltender Evgeni Nabokov from joining training camp, which contributed to Lombardi losing his job.

So whose to blame for this? Lombardi? He offered the guy a 6 – 8 year deal worth $6.8 million per year, according to Yahoo sports. That is an extremely generous deal, considering the type of defenseman Doughty is, and he’s still holding out.

Do we blame the agent? Meehan definitely wants to make a major pay-day with one of the NHL’s best, and may be willing to keep Doughty out of training camp to do so.

Do we blame Doughty? He could have over-ridden his agent if he truly wanted to get back on the ice, and frankly that’s where he should be right now.

Either way, Doughty is losing major respect all across the NHL. Meehan wants his 15%, Doughty wants what he thinks he deserves, and Lombardi is trying to keep is job while trying to get to the Stanley Cup Finals in June. So I ask you, Kings fans: If October 7th comes and Doughty is not on the starting roster, will you ever forgive him?