Home / NHL / Capitals vs Penguins, not what it used to be. 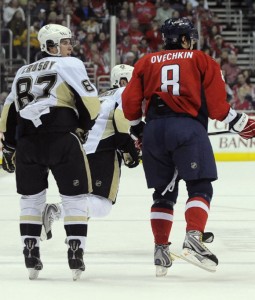 It was not long ago that the NHL wouldn’t schedule the Washington Capitals and Pittsburgh Penguins to play each other until after the new year. You may get one early game, but then the other 3 (if not all 4) were played when the games mattered most. For most of the last 5 seasons, you could drive down to the Verizon Center and catch these two teams going head to head as the 1230pm feature game on NBC on Super Bowl Sunday. In Washington DC, with the Redskins never being talked about on Super Bowl Sunday, that was how the day started. Just 3 short years ago my family and I drove down hours after a blizzard to a packed Verizon Center to see the Caps make a great comeback and win. The days of this being a big time game are all but over. The NHL strike, coupled with Crosby’s injuries and the Capitals downfall has taken a lot of luster out of the series.

I went to a Capitals and Penguins game at Verizon Center back in the fall of 2007, literally weeks before the Caps hired Bruce Boudreau as their head coach. Over 18,000 fans can fit in to the Verizon Center, then called the MCI Center, but the arena was about half full and mostly all Penguins fans. Fast forward to this past Sunday, where you could hear the Penguin fans cheering on TV when their team scored a goal. Could this simply be the effect of the team being terrible to start the season or is this a problem faced because of the NHL lockout?

Pittsburgh isn’t the type of city that Washington DC is. Pittsburgh does have three sports teams, Pirates, Steelers and Penguins, but to be honest they only really have two teams to worry about (Pirates haven’t been to the playoffs since the 90’s). Washington DC has a bunch of professional and college teams, not to mention a diverse population in its city. Many people who live in and near DC have other favorite teams having moved from elsewhere. Hockey was big in DC when the Caps were the top team in the NHL, but no one took into consideration how poor the Wizards, Nationals and Redskins were at that time. It really was only a matter of time before the Capitals slipped back down to the 3rd of 4th team in its city. Pittsburgh knows that the Pirates usually won’t matter by July 4th and that the Pittsburgh Steelers will at the very least be in it on the last day of the season. The Penguins matter, but the team only competes with the Steelers for three months and when playoffs come around its all Penguins.

With the fan bases being covered, now how about the teams and players? The Ovechkin/Crosby rivalry died off after Crosby’s injuries after the Winter Classic (which was Caps/Pens). I was at that game and both fan bases were fierce and at each other from the time we arrived on New Years Eve, until after Caps fans left the city of Pittsburgh. That was the absolute peak of the rivalry. Once Crosby was gone the whole marketing deal was gone. Ovechkin vs Malkin isn’t what people wanted to see as the headliner. Verizon Center was still full and plenty loud, there was no shortage of chants directed maliciously at the Penguins, but you could tell something was missing.

Now all I seem to hear on the NHL network is how Ovechkin isn’t what he used to be and isn’t an elite player anymore. You also hear how Crosby has come back from his concussions. There hasn’t been the debate of Crosby or Ovechkin, those days are long gone. Crosby has to prove he can stay healthy for a full 82 game slate and Ovechkin needs to prove he can still put the puck in the back of the net on a consistent basis. Until that happens, who really cares if Pittsburgh plays Washington. Sure Washington is 9-0-1 in their last 10 games at Pittsburgh and hasn’t lost in regulation in Pittsburgh since February 18, 2007. Only the fans look at it like that now. The players see it as a tough game with lots of talent on the ice.  It isn’t as chippy as it once was, no where near the levels of the early 90’s when half of both benches were sent to the locker room with 30 seconds to go in a playoff game due to fighting.

The Capitals and Penguins once stories rivalry is falling fast and furious. Until both teams can play a meaningful game (playoffs or for top seeding) then the rivalry buzz won’t come about. As for now its just the fans doing a bunch of trash talking and not a lot happening on the ice itself. Crosby talks about how he has a ton of respect for Ovechkin, just a few years ago the two would just say “he’s a good player” and leave it at that. As for now, the Capitals/Penguins rivalry is on ice until both teams can became relevant and back to top 5 in the Eastern Conference.