After an ugly labor stoppage, one would think the National Hockey League would show some remorse toward its loyal fan base and offer an olive branch of reconciliation.  The fan base that showed up on droves on the (4-month  belated) Opening Weekend and have still been filling arenas despite losing almost half the season to a lockout.  If ticket prices are the evidence, then one would be wrong in that assumption. 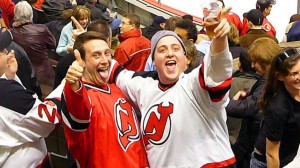 Something tells me these guys aren’t worried about ticket prices

According to the “Fan Cost Experience” Blog by ESPNChicago’s Jon Greenberg, ticket prices are up almost 6%, with nearly an 8% price hike for a family of four (taking into account non-ticket expenses, thos kids need their foam finger and sodas).  I’m sure all of us, in this recession got 5% – 10% raises this year…right?  Oh wait, you don’t even have a job?  Ouch.  For reference, the NFL and NBA went up between 2% and 4% on ticket prices this year to last (MLB next to report).

Perhaps you can’t argue that the business model is not valid, as the higher prices don’t seem to be pricing fans out of attending games, at least so far.  Maybe it was a case of fan hunger after the lockout enabling this.  Which would not be the best lesson to teach those who were responsible for the near lost season.

I guess to quote the title of a Shakespeare Play “All’s well the ends well”.  Game on!