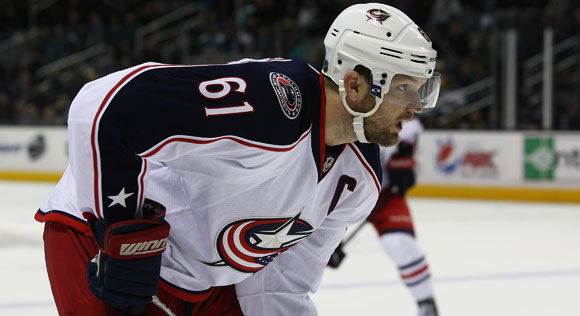 The NHL, less than two weeks away from the trade deadline, is abuzz with the potential of former All-Star, Olympian and the 2002 #1 overall pick Rick Nash possibly being dealt out of Columbus, who currently sit in last place in the league standings. But where could he go? Nash has the final say in where he’s traded, if at all, as he currently has a no-trade clause in his contract, a clause that he would have to waive to validate any potential deal. Who could make a move for the former 40-goal scorer? Here are five potential trade scenarios involving Rick Nash being dealt:

Why it could happen: Columbus has said that any trade request involving Nash will need an offering of at least four pieces in exchange for the Blue Jackets captain. Here, the Maple Leafs can offer the Blue Jackets depth at three positions they’re hurting badly at (center, defenseman and goaltender) and even toss in a draft pick for good measure, and in exchange the Maple Leafs will get another explosive forward to team with Phil Kessel and Joffrey Lupul.

Why it may not happen: Toronto has plenty of offense already. They need defensive help, and are unlikely to trade away so much for someone who isn’t a blueliner. Also this trade, while giving Columbus what it needs, would ravage Toronto’s depth at goaltender and defenseman, making it even more unlikely that it happens.

Why it could happen: Dallas has the cap space to accommodate Nash’s salary, and the young prospects to feed Columbus’ rebuilding project. The Stars have been badly in need of a superstar marketing tool ever since Mike Modano retired, and the addition of someone like Nash could reinvigorate the fan base in a big way. Dallas’ top line would feature three All-stars under the age of 28 in Loui Eriksson, Jamie Benn and Nash, making them a potent force for the foreseeable future. For Columbus, they’d get a pair of highly-touted young prospects for the future in Glennie and Campbell, each of whom would fill a need at center and goalie for the Blue Jackets sometime in the near future. They’d also get a draft pick to continue the rebuilding process, and a tough forward like Morrow to fill out their current offensive rotation.

Why it may not happen: Dallas is not a guaranteed contender, so Nash may not waive his no-trade clause to go there. Dallas also may not want to part with the core of its future in Glennie and Campell, their respective 2009 and 2010 first round draft selections.

Why it could happen: The Rangers love making splashy moves. Signing Marian Gaborik and Brad Richards are the two highlights of a recent Rangers regime that has made a name for itself by making big moves in the trade market and free agency. They’ve got the spare parts to offer Columbus for Nash, giving up two young forwards in Dubinsky and Anisimov, as well as an elite prospect in former 2009 first-round pick Chris Kreider. On the Blue Jacket side of the equation, they get some badly needed depth on offense, and two key pieces in Kreider and a first round draft selection to speed along their rebuilding process.

Why it may not happen: The Rangers are the top team in the NHL right now (in terms of points percentage). Why mess with the team’s chemistry by shipping off two key depth players like Anisimov (28 points) and Dubinsky (25 points) for someone who will have to be put on one of the top two lines?

Why it could happen: This trade has everything Columbus could want; two forwards under the age of 25, an elite goaltending prospect, and a defensive prospect to fill out their rebuilding project. And in exchange, Boston basically gives up one top-six forward for another (Krejci for Nash), a depth player in Pouliot, and two prospects who have never even seen the ice for the Bruins.

Why it may not happen: Quite simply, Boston doesn’t need Nash. They’re already a contender, and while adding a player of Nash’s caliber would make them even more dangerous, they may not want to gut their depth just to bring someone like him into the fold.

Why it could happen: Ryan Miller has quickly fallen out of favor in Buffalo, struggling mightily on his way to posting career-worst numbers in 2011-12. As of this writing, Miller’s only top-10 statistics are goals allowed and losses. Trading him, free agent disappointment Ville Leino, a pick and a prospect like Luke Adam would give Buffalo a lot of necessary cap space, while adding an playmaker like Nash to rejuvenate the NHL’s sixth-worst offense (142 goals in 58 games so far). For Columbus, they get badly needed goaltending help (perhaps a change of scenery is all Miller needs, as he’s been under a white-hot spotlight in Buffalo the last few years), a gritty forward to fill out their second line with Leino, and a young player like Adam who’s already seen NHL action, and at only 21 years of age can be counted on as part of the future.

Why it may not happen: Buffalo may not be so ready to fire-sale their team after only one bad year. Miller has been the face of the franchise for the better part of a decade now, and it’s not fair to him to send him packing for one poor season. While this trade could be the shake-up both teams need, it’s also very likely that Buffalo and Columbus would be better off sticking with what they have.