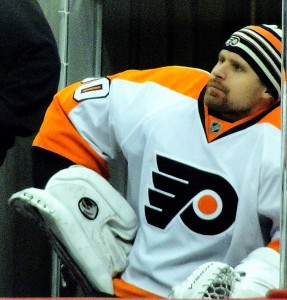 The Philadelphia Flyers finished the first half of the NHL season in a decidedly unceremonious fashion. Not only did theylose a 4-2 decision to their division rival New York Rangers, but it dropped them to ninth place in the Eastern Conference and fourth place in the Atlantic Division.

Suffice it to say, this is not where the Flyers expected to be at the midpoint of the season. Philadelphia has made the playoffs each of the past five years, and with their roster mostly intact from last year’s playoff team, they expected to be in the thick of the postseason hunt by this time. While ninth place in the conference with 24 games to go isn’t exactly a death sentence, the situation wasn’t lost on Flyers goaltender Ilya Bryzgalov.

“”We’re not good. We obviously not in the spot where we want to be and (if nothing changes) it’s going to be more ugly. What else can I say? This is the reality.”

Bryz has never been one to mince words. Whether he’s philosophizing about the universe or making it clear that he’s only afraid of bears, he’s always good for a quote. But this isn’t something, like those other soundbites, that should be laughed off. The Flyers are in danger of missing the postseason if they can’t clean up their play. Philadelphia currently leads the league in penalty-minutes per game, and that’s probably the first thing that needs to be fixed. It’s tough to win if you have to kill off 17 minutes of power-play time for the other team each game.

Of course, Bryzgalov could also afford to clean up his own play a little, seeing as his save percentage (.903) and goals-against average (2.68) rank a paltry 29th and 25 in the NHL, respectively. But the idea that “it’s going to be more ugly” needs to wake the Flyers up as a team if they want to get back to the playoffs this year. They’ve got 24 games to get things right- let’s see if they can make the most of their opportunity.