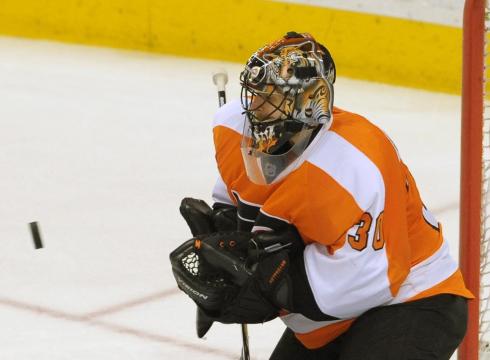 Philadelphia Flyers starting goaltender Ilya Bryzgalov has been listed as “day-to-day” on the team’s injury list with a foot fracture, as initially reported by NHL.com, and may not be available for the start of the NHL playoffs in a few weeks. Bryzgalov, who signed a nine-year, $51 million contract with Philadelphia this offseason, has been a key part of their run to the postseason this year, as he’s ninth in the NHL with 32 wins in 57 starts, as well as fourth in the NHL with 6 shutouts. He’s also heated up as the NHL season comes to a close, as he’s 10-2-1 in his last 13 games with four shutouts, helping the Flyers to 5th place in the Eastern Conference while clinching a playoff spot.

An MRI showed that Bryzgalov appeared to suffer the injury sometime during the Flyers’ 5-3 loss to the Tampa Bay Lightning, as he was seen limping after the game. It’s suspected that he may have suffered the injury during pre-game warmups (according to Flyers’ general manager Paul Holmgren) when he was hit in the foot by a shot from teammate Jakub Voracek. With Bryzgalov out, the Flyers will lean on Bryzgalov’s countryman, 24-year-old Sergei Bobrovsky as the starter, and will call up either Michael Leighton or Jason Bacashihua from the Adirondack Phantoms (Philadelphia’s AHL affiliate) to be the backup.

Philadelphia hopes to have Bryzgalov back sooner rather than later, as weak goaltending the past couple seasons has doomed them in the playoffs, and was one of the key reasons they acquired Bryzgalov this past year.