Home / NHL / Henrik Lundqvist on Controversial Goal: “Someone wanted the Senators back in it” 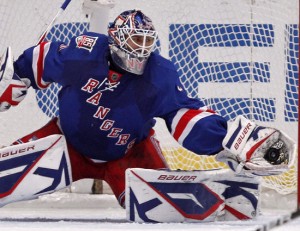 With under a minute left in Game 6 of the New York Rangers- Ottawa Senators playoff series, Senators’ forward Jason Spezza scored, making it 3-2 Rangers while bringing the Senators within one goal. However, after a few replays, it apparently seemed as though Senators forward Chris Neil had illegally kicked the puck into a net, an illegal play which would have nullified the goal. After a lengthy video review, it was determined that it was a good goal, keeping the score 3-2 with about 38 seconds left to play, keeping Ottawa within a goal and leaving them with the opportunity to tie the game. The Rangers held off the Senators for a 3-2 win, but Rangers goaltender Henrik Lundqvist was not happy about the call. After the game, he had this to say:

“…a kick? And they still called it a goal? That scares me, that someone can call that. It still upsets me…Someone wants them back in the game obviously. There’s no other explanation.”

Whether or not there’s a conspiracy remains to be seen, but Lundqvist can probably expect a monetary penalty from the league, especially after his head coach, John Tortorella, earned a $20,000 fine for questioning the NHL in a similar manner.

Decide for yourself. Here’s the goal in question (Thanks to Yahoo!’s Puck Daddy blog for having the clip):