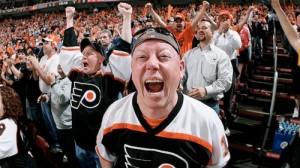 Having already lost a full season (2004-5) to a strike, hockey fans collectively groaned when, once again, owners and players seemed destined for another potentially lost season.  This for a sport that has struggled to get meaningful TV exposure and remains a distant 4th place in terms of U.S. viewership.

Hockey fans are a hearty bunch, though.  Their passion for the sport seems to override their disdain for the work stoppage, as the first weekend of hockey has exceeded all expectation in terms of TV and attendance metrics.

According to Greg Wyshynski of Yahoo Sports, NBC Sports reported a (relatively paltry, but good for hockey and mid-day) 2.0, the highest in a decade for a game that was not the Winter Classic.

Additionally, the first 17 games were complete sellouts according to USA Today’s Kevin Allen.

Gary Bettman noted his appreciation for the fans response:

“We appreciate and are gratified by the response we have received from our fans,” NHL Commissioner Gary Bettman told USA TODAY Sports on Sunday. “The attendance numbers and TV ratings once again demonstrate the passion of NHL fans. It is a testament to the players and the teams and the ways we all have tried to reach out.”

What remains to be seen is whether this was fans starving for hockey and willing to forgive in the short term, or whether hockey fans truly will continue to watch and attend at record paces.  I hope for the latter, hockey is the best game that too few American sports fans watch.

Regardless, for better or for worse (sometimes I feel like work stoppages should be greeted with reluctance upon return as a voice of the fan), it appears hockey will escape this latest work stoppage no worse for the wear.