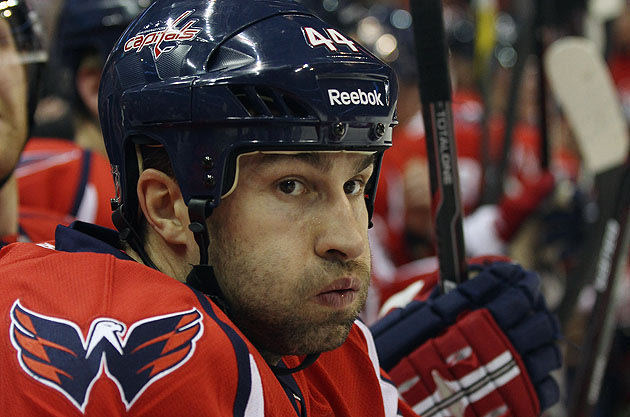 Roman Hamrlik, a veteran of almost 20 years, has been placed on waivers by the Washington Capitals.

Two years ago, Washington general manager George McPhee signed defenseman Roman Hamrlik to a 2 year, $7 million contract hoping he could bring some offensive spunk to the Capitals back in along with some vet presence. Now 38 years old, Hamrlik has been placed on waivers by the Capitals to make room for newly signed defenseman Steve Oleksy. Hamrlik, who has only played four games this season has seemed to have fallen out of favor with new head coach Adam Oates. The former #1 overall pick in 1992 for the Tampa Bay Lighting had his best season in ’95-96 when he registered 65 points (16 g 49 A) and played all 82 games. Hamrlik came to the Nations Capital after spending four seasons with the Montreal Canadiens where he registered no more than 34 points in a season.

Oleksy, a native of Chesterfield, Michigan has spent the year with the Capitals AHL affiliate Hershey Bears, where he registered 14 points (2 g, 12 A) and 151 pim’s. A three year starter at Lake Superior State, Oleksy spent last season between the ECHL’s Idaho Steelheads and AHL’s Bridgeport Sound Tigers. He signed as a free agent with Hershey in July of 2012 and was signed and recalled to the Capitals on Tuesday.