Home / Comparison/Player Vs. Player / Patrik Stefan vs. Alexander Svitov: Who was the bigger bust?

Sometimes, it’s not about who is best. Sometimes, it’s just more fun to decide which train-wreck of a career was truly the worst. With that in mind, we’re going to take a look at Patrik Stefan and Alexander Svitov, two former NHL first-round draft picks, and see who the bigger failure was.

Alexander Svitov was the third overall selection in the 2001 NHL Entry Draft, taken after two players who would develop into perennial All-Stars; Ilya Kovalchuk of Atlanta Thrashers (and later the New Jersey Devils), and Jason Spezza of the Ottawa Senators. Patrik Stefan was the first overall pick in the 1999 NHL Entry Draft, the first-ever draft choice of the newly founded Atlanta Thrashers (what an omen that turned out to be). So, which of these two players was the bigger flop? Who faltered the hardest under the bright lights of the National Hockey League?

Why Patrik Stefan was the bigger bust:
Stefan was the first pick in his entire draft class. He was supposed to be the best. But Atlanta, instead getting an All-Star like Daniel Sedin, Henrik Sedin, Nick Boynton, Martin Havlat, Ryan Miller or Henrik Zetterberg from the ’99 class, got a player who seemed to be a microcosm of the Thrashers’ doomed future. In roughly six seasons with Atlanta, Stefan scored 59 goals, picked up 118 assists and netted a grand total of 177 points. He never scored more than 14 goals in a season, nor did he ever surpass the 28-assist mark in a year. After six dismal years in Atlanta, Stefan was dealt to the Dallas Stars, with whom he netted only eleven points in 41 games (five goals and six assists). And it was with Dallas that Stefan had the infamous, “epic fail” play that seemed to define his career:

The announcer said it best: “That’s the most ridiculous thing I’ve ever seen. Patrik Stefan, you should be embarrassed for what you just did. That does not belong in the National Hockey League”

And that announcer’s words proved prophetic. When Stefan’s contract expired in Dallas, so did his NHL career. After only seven seasons, the number one overall pick in the 1999 NHL Entry Draft finished his tenure with only 64 goals, 124 assists, and 188 total points in his career. 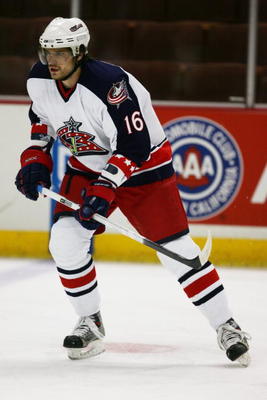 Svitov was dealt to Columbus after only one year in Tampa Bay. (Photo Credit: Bleacher Report)

Why Alexander Svitov was the bigger bust:
Svitov was the third pick in the 2001 Draft. He, for all intensive purposes, should have been the third best player, or at the very least, one of the best players, to emerge from that class. After Ilya Kovalchuk went to the Thrashers with the first pick, and Jason Spezza went to the Ottawa Senators with the second selection, the Tampa Bay Lightning thought they were getting a key piece in their rebuilding project with the selection of the big, physical Svitov; a power forward with scoring ability who could pair with Vincent LeCavalier to form an intimidating pair on the Lightning’s top line. Instead, Tampa Bay used the third overall selection on a player who played only four seasons in the NHL, a mere one of those fully spent with the Lightning. His rookie (and only) season with the Lightning came in 2002-03, when Svitov played 63 games, registering only eight points (four goals and four assists). The following year, Svitov skated in only 11 games for the Lightning before being dealt to the Columbus Blue Jackets, with whom he played a mere 29 games in 02-03. He spent the next two years bouncing between the American Hockey League and the Russian Superleague, before coming back to the Blue Jackets for one final season in 2006-07. That year, Svitov played 76 games for the Jackets, but notched only 18 points (seven goals and 11 assists). Svitov’s body of work: 179 career NHL games, 13 goals, 24 assists, and 37 points. He did, however put his 6’3”, 245 pound frame to some use: during his time in the NHL, he racked up 223 penalty minutes, including 145 in 2006-07.

Final Verdict:
While there is much failure to sift through in both players’ careers, it seems as though Svitov is the bigger draft bust. Stefan certainly has more notoriety, since he was the first overall pick, he was supposed to be the foundation of a fledgling Atlanta franchise, and he has that one, bone-headed play to his credit, Svitov’s overall body of work is just far worse. Four seasons, 37 total points to Stefan’s seven seasons and 188 points. That’s all Svitov had to show for being the third overall pick in the 2001 NHL Draft. Though, in these players’ defense, this must be said: both the 1999 and 2001 NHL Drafts, in retrospect, were two of the weakest, shallowest pools of the last 15 years. The ’99 class produced only six All-Stars, and the ’01 class only churned out seven All-Stars of its own. Perhaps these two players were the byproducts of being forced to the head of two draft classes that were doomed to fail anyways. Still, what remains of the careers of Patrik Stefan and Alexander Svitov is that both were chosen high, but played low.