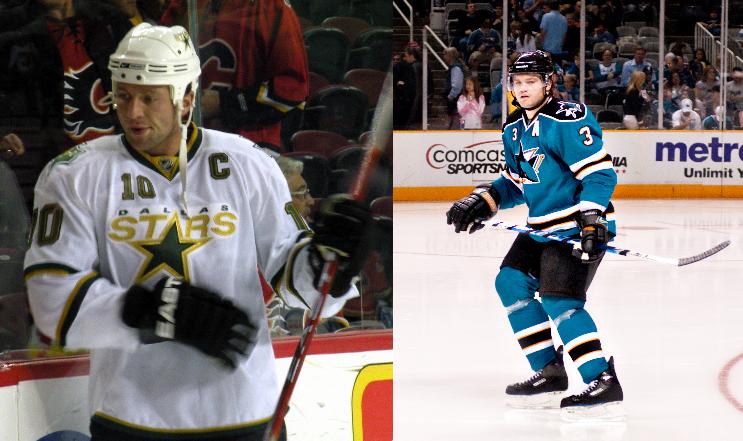 Brenden Morrow and Douglas Murray have joined the Penguins for a shot at the Stanley Cup. Image Credits: Wikipedia Commons

The Pittsburgh Penguins have made it clear: they want to win another Cup. Now. They dealt parts of their future (top prospect Joe Morrow, a fifth-round pick and two second-round choices) to acquire two players who could be the missing elements they need to bring home Lord Stanley’s Cup.

On Sunday, the Penguins sent Morrow, their 2011 first-round pick, and a fifth-round pick to the Dallas Stars in exchange for 34-year-old left wing Brenden Morrow and a third-round choice. While Brenden Morrow doesn’t provide a great offensive presence anymore, Pittsburgh already has that in spades, and won’t ask him to do that. They’ve already got Sidney Crosby, Evgeni Malkin, James Neal, Kris Kunitz and Kris Letang to provide all the offense they need (Pittsburgh leads the league with 116 goals scored so far this year). What they will count on him for is leadership, and the aggressive, gritty style of play that made him team captain in Dallas for the past seven years.

The Penguins weren’t done yet though. One day after dealing for Morrow, Pittsburgh sent two draft choices, a 2013 second-round pick and a conditional 2014 third round pick that could become a second-rounder, to San Jose in exchange for shutdown defender Douglas Murray. Like Morrow, Murray doesn’t provide much offense, but the two of them will be counted on to make the Penguins much tougher to play against.

Pittsburgh already stands atop the Eastern Conference with just about one-third of the regular season left to play. It’s clear they’ve already got their sights set on the postseason, and a first-round exit like last year’s just won’t do. They’ve mortgaged some of their future in a gambit that makes them heavy Cup favorites.

Only time will tell if Pittsburgh made the right moves, but on the heels of their current 12-game winning streak and the acquisition of two players who will make them all the more tougher to play against, it’s tough to argue with their transactions or with their standing as favorites to hoist the Cup come July.