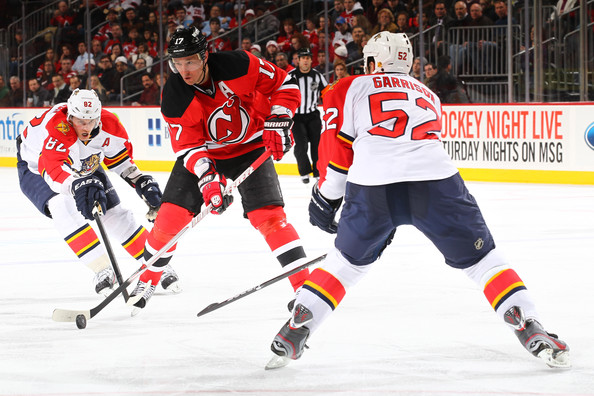 So many storylines here it is almost hard to count. The Florida Panthers have won the Southeast Division for the first time in franchise history. This success has brought them face to face with the sixth seeded New Jersey Devils squad, who is ripe with firepower and is eager for postseason success.

Offense: The New Jersey Devils seem to have the depth and the offensive firepower to match any of the elite teams in the Eastern Conference. Ilya Kovalchuk has had a bounce back year since signing his controversial contract with New Jersey in the summer of 2010. Zach Parise has been quietly strong for the Devils, scoring 31 goals and 69 points. David Clarkson has also had a breakout year, scoring 30 goals this season, a career high. Florida has been successful with their top lines doing most of the scoring. Tomas Fleischmann leads the team with 27 goals, followed by Kris Versteeg (23 goals) and Stephen Weiss (20 goals). However, Florida cannot match the offensive depth that has helped New Jersey be one of the most dangerous teams in the NHL.
Advantage: New Jersey

Defense: Both teams have been carried by their defensive play this season. New Jersey upgraded what was already one of the league’s best defenses by acquiring Marek Zidlicky from Minnesota before the trade deadline. Defensemen Bryce Salvador and Anton Volchenkov have been the top shutdown pair for New Jersey this season and have helped the Devils be one of the lowest scored against teams in the NHL this season. Florida made a splash during the offseason, acquiring Brian Campbell and Ed Jovanosvki who have been powerhouses for the Panthers this season on the blueline. However, the Panthers integrated youth to their blueline this season with Dimitry Kulikov and Erik Gudbranson, and that lack of experience may hurt the Panthers in this series.
Advantage: New Jersey

Goaltending: Between the pipes for New Jersey is the legendary Martin Broduer who, although aged, has been solid for the Devils this season, earning 31 wins and 2.41 goals against average. On the other end of the rink is the Florida goaltending tandem of Jose Theodore and Scott Clemmensen, the former backup goalie for New Jersey. Theodore has struggled in the postseason with Washington and Clemmensen has played a limited role as the backup goaltender for the Panthers. Broduer gets the edge just because of experience alone. He isn’t what he used to be, but he knows how to win and despite what people think, he’s still got what it takes.
Advantage: New Jersey

Prediction: It is an extremely impressive accomplishment for the miss-matched Florida Panthers, who captured the Southeast Division and return to the NHL playoffs after a 7 year absence. However, it’s no secret that Florida almost didn’t make it this far. They struggled down the stretch, going 2-3-5 in their last 10 games of the season. The New Jersey Devils, however, are salivating at the chance to make a dent. After missing the playoffs last season, Ilya Kovalchuk is dying for his first chance at post season success and coveted free agent Zach Parise wants to prove that he can lead his team to postseason victory, while old-timers like Martin Broduer and Patrik Elias are looking at this as their one last chance at a Cup run. It’s been a magical season for the Florida Panthers, but the road ends here.
Forecast: New Jersey Devils in five