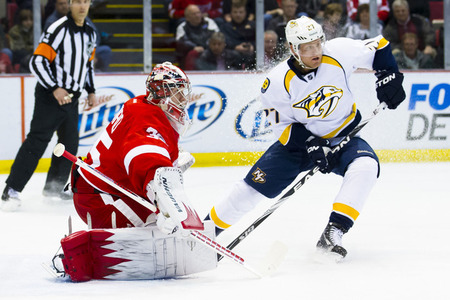 2011-12 Head-to-head Matchup: The season series was split right down the middle between these two teams. Each won three of the six games played, while Detroit scored 16 goals and Nashville scored 14 in the six games played. Suffice it to say, the season series is a dead heat, and offers no clue as to who will win this playoff series.
Advantage: Even

Offense: The key for these two teams is balance. Detroit had 11 players score 10 goals or more; Nashville had 10 players with 10 goals or more. The Red Wings had five players with 40 or more points; Nashville had seven. Detroit scored a total of 248 goals this season; Nashville is just behind with 237. It’s close, but Detroit gets the edge here because they’ve got more goals scored, and four 20+ goal scorers (Johan Franzen, Henrik Zetterberg, Jiri Hudler and Valterri Filppula) to Nashville’s two (Patric Hornqvist and Mike Fisher).
Advantage: Detroit

Defense: In terms of personnel, Nashville has the advantage. In terms of numbers, Detroit has the edge. Nashville has two of the best defensemen in the game with Ryan Suter and Shea Weber, as well as towering veteran Hal Gill, a 6’7” behemoth on the blueline who’s played for sixteen years. However, Detroit as a team allowed seven fewer goals than Nashville did this season, a small-but-not-overlookable total. Not to mention, the Red Wings feature aging legend Nicklas Lidstrom on their blueline. Still, the differences here are so negligible that there is no clear winner in this category.
Advantage: Even

Goaltending: Detroit’s Jimmy Howard is quite a good goaltender, but he’s not yet in the same class as Finnish workhorse and former Vezina nominee Pekka RInne, the goaltender for Nashville. Rinne started a league-high 72 games, and he also won a league-high 43 of those (and earned his team a point in 13 other games). Howard’s good, but Rinne’s better.
Advantage: Nashville

Special Teams (Powerplay/Penalty kill)
Here’s where the matchup may be decided. Nashville boasts the NHL’s top powerplay unit, ranking first with a 21.6% powerplay conversion. Detroit lags way behind at 22nd overall, having converted only 16.1% of their powerplay chances. Detroit also possesses a pretty average penalty kill, having knocked off only 81.8% of their penalties, good for 18th in the league. Nashville, on the other hand, ranked 10th in the league with an 83.6% penalty kill. Nashville has a huge edge when it comes to both penalty killing, as well as taking advantage while the other team is down a man.
Advantage: Nashville

Prediction: This is an exceptionally close matchup, but Nashville’s top-ranked powerplay against a Detroit penalty killing unit that ranked in the bottom half of the league this year is what gives the Predators the upper hand. Detroit may have a chance if they stay out of the penalty box (something they’re quite good at, seeing as they’re second in the league in terms of fewest penalty minutes per game…second, in fact, only to Nashville), but that’s no guarantee, especially in an emotionally-charged playoff series against a division rival. Couple that with the fact that Nashville finished strong (three straight wins to close out the season) while Detroit limped into the postseason (four losses in their last six games), Nashville will probably take this one, even if it is a long series.
Forecast: Nashville in seven