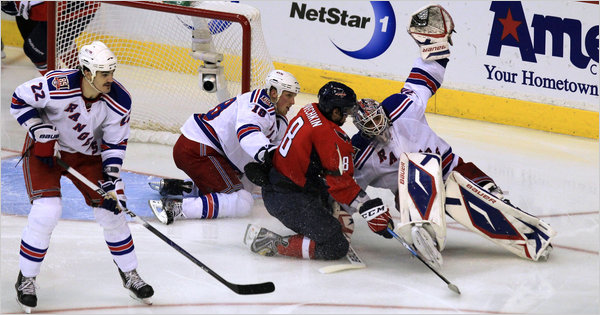 Recent postseason rivals meet again. This is the third time in the past four years that the Rangers and Capitals have played each other , with the Capitals having bested the Rangers in both of the previous two meetings. Both teams are coming off seven-game series, and won with a combination of great goaltending, balanced offense and by keeping games close.

2011-12 Head-to-head Matchup: Washington and New York met four times in the regular season, with each team winning two of the matchups. Washington did outscore the Rangers 13-11, but that’s not enough of a difference to give the Capitals a clear advantage in this category.
Advantage: Even

Offense: Neither team has been particularly good at scoring goals this postseason. New York averaged an even two goals per game in the first round; Washington came in a little higher at 2.29. During the regular season, these two were about dead even in that same category as well; the Rangers averaged 2.71 goals/game, the Capitals averaged 2.67. Neither team is clearly better on offense, so this one’s a dead heat.
Advantage: Even

Defense: This is definitely a strong suit for the Rangers. They’re a team that is quite adept at blocking shots, and get effort from every one of their skaters in that category. They also allowed fewer shots on goal in both the regular season (27.8 to 30.2) and the playoffs (31.1 to 35.4) than the Capitals.
Advantage: New York

Goaltending: Goaltending is really the key to how both teams advanced in the first round. The Rangers got their usual stellar play from Vezina and Hart Trophy nominee Henrik Lundqvist; and the Capitals got nothing short of a small miracle from Braden Holtby, who started all seven first-round games and was phenomenal for them despite being an injury call-up after Tomas Vokoun and Michal Neuvirth got hurt at the end of the regular season. Still, Lundqvist has long shown that he is one of the best goaltenders in the league, despite his playoff struggles in years past.
Advantage: New York

Special Teams: The power-play units of these two teams have pretty much been dead even in terms of production this postseason. Washington has converted 15.8% of their chances; New York has converted 15.6% of theirs. This is a near-mirror image of their regular season proficiency; Washington and New York converted 16.7 and 15.7% of their power play chances, respectively. As for the penalty killing-proficiency of each team, Washington has been great in the postseason but was average in the regular season; New York has been average in the postseason but was great in the regular season. Washington’s been better on special teams recently; New York showed they could do it better over a longer period of time, this is a wash.
Advantage: Even

Prediction: This is going to be a close series, with most games in all likelihood being decided by a goal. And no matter who wins, this will be the first time that at least one of these two franchises advances to the Eastern Conference Finals since the NHL lockout in 2005. Washington has seemed to have had Henrik Lundqvist and the Rangers’ number in years past, but this may be the year that the Rangers finally break through.
Forecast: Rangers in seven.