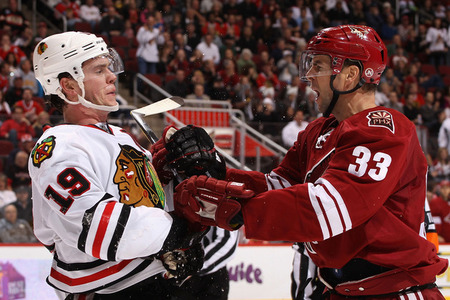 Two playoff mainstays from the past few years will square off in the first round, as the Pacific Division champion Phoenix Coyotes will take on the sixth-seeded Chicago Blackhawks. Each team has made the playoffs the past three years. An item of note; Chicago actually had more points in the standings than Phoenix did (101 to Phoenix’ 97), but Phoenix gets the higher seed because of its status as a division champion.

2011-12 Head-to-head Matchup: Phoenix dominated the season series between these two teams this year, winning three of the four games played while outscoring Chicago 13-9 and shutting them out once. It may only be a small sample size, but a 3-1 advantage would be pretty insurmountable in the playoffs.
Advantage: Phoenix

Offense: Phoenix’s top goal scorer, Radim Vrbata, notched 35 lamp-lighters this past season, more than the 33 put up by Chicago’s top scorer, Patrick Sharp, but overall the Blackhawks had a superior offensive game. Chicago ranked seventh in the NHL with 248 goals scored this year; Phoenix, meanwhile lagged ten spots behind, coming in at 17th in the league with 216 goals scored, a whole 32 fewer than the Blackhawks.Chicago also boasts far better scoring depth than Phoenix. The Blackhawks had six players with 40 or more points, and five players with 20 or more goals; the Coyotes only had four players with 40 or more points, and only three players who surpassed the 20 goal mark.
Advantage: Chicago

Defense: Phoenix may have allowed fewer goals than Chicago did this past year, but that is more indicative of their goaltending skill than anything else. Chicago’s defensive play allowed 2,343 shots on goal, the ninth-smallest total in the NHL in 2011-12. Phoenix, on the other hand, surrendered 2,593 shots on goal; third worst in the league.
Advantage: Chicago

Goaltending: It’s safe to say that Phoenix’s goaltending is what got them into the postseason this year. Despite an offense that ranked in the bottom half of the league and a  defense that allowed opponents to take the third-most shots in the NHL; the Coyotes were bailed out time and again by Mike Smith, and backup Jason Labarbera, who combined to allow only 204 goals (seventh best in the NHL). Smith racked up eight shutouts and had a save percentage of .930; both of which were good for third best in the league this past year. Smith also had the seventh-best goals-against average in the league (2.21). Chicago, on the other hand, relied on the dubious tandem of Corey Crawford and Ray Emery, who had moments of efficiency, but each ranked outside of the top 30 goaltenders in the league in terms of goals-against average and save percentage; and neither registered a shutout all year.
Advantage: Phoenix

Special Teams: The powerplay is not an area either team is probably very proud of. Chicago had the 29th– worst powerplay unit in the league in 2011-12, converting only 14% of their extra-man chances; Phoenix had the 28th– worst powerplay unit in that same span of time, having converted only 14.3% of their chances. However, Phoenix was quite adept at killing off other teams’ powerplays; they ranked eighth overall in the NHL with a 85.5% kill rate. Chicago’s penalty kill, on the other hand, was as efficient as their powerplay unit, ranking 27th in the NHL with only a 78.1% kill rate.
Advantage: Phoenix

Prediction: While Phoenix has never advanced past the first round of the playoffs in their entire 14-year history, this may be the year they finally, as Led Zeppelin would say, “break on through to the other side”. They matched up with Chicago quite well during the regular season, beating them three times while losing only once; and their goaltending will be enough to keep them in games while Chicago’s netminding will likely be their downfall.
Forecast: Phoenix in six