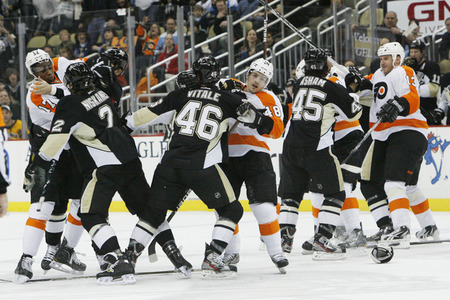 If the season series is any type of foreshadowing, this first round matchup should not only the most intense, but the most exciting, action packed, drama filled series of maybe the entire 2012 NHL Playoffs. After sitting out much of the season, Sidney Crosby will lead his team against the cross-state rivals, the Flyers, led by their young sniper Claude Giroux and enigmatic goaltender Ilya Bryzgalov.

2011-2012 Head-to-Head Matchup: The Flyers took the season series easily, winning four of the six games faced against the Penguins. Although Pittsburgh took the last game decisively, and the Penguins were without Crosby the entire year, Philadelphia still definitely has the edge.
Advantage: Philadelphia

Offense: Two of the league’s most offensively gifted teams will be on display in this series. For Pittsburgh, it’s been the Evgeni Malkin show all season. He has scored 50 goals on the year and has almost single-handedly lifted the team on his shoulders with the absence of Crosby. Left wing James Neal also added 40 goals to help lift the Penguins offensively. On the other end, the Flyers have been led by their young scorer Claude Giroux, who picked up 65 assists this season. Bruiser Scott Hartnell had team high 37 goals, and veteran Jaromir Jagr had 19 salutes on the year. However talented Philadelphia might be up front, in an offensive shootout, the Flyers are no match for Malkin and the Penguins.
Advantage: Pittsburgh

Defense: The Flyers have been led by their veteran presence on defense. Kimmo Timonen had 39 assists this season, while his partner Matt Carle picked up 34 assists. Although they have missed the presence of team captain Chris Pronger all season due to concussion symptoms, newly acquired pieces Pavel Kubina and Nicklas Grossman have stepped into their roles nicely in the orange and black. The Penguins have suffered injuries of their own. Superstar Kris Letang had been out briefly during the season but has returned the lineup and should be ready for the first round of the playoffs. Paul Martin and Brooks Orpik fill what is one of the NHL’s most stingy defenses, however even without Pronger, the Flyers defense is really what helps them win games.
Advantage: Philadelphia

Goaltending: The Flyers have dealt with enigmatic goalies before, and they seemed to have found another one in Ilya Bryzgalov who has had the epitome of what some may consider an up and down season. At times, Bryzgalov looks like he has never played hockey before, others he looks like a Vezina Trophy contestant. The Penguins have had much more consistency in net with Marc-Andre Fleury, who has quietly put up impressive numbers as the Penguins backup. No matter what people say, Bryzgalov is still a wild card come playoff time.
Advantage: Pittsburgh

Special Teams: As if these teams couldn’t be more of a toss-up. The Penguins and Flyers are both tied for 5th in the league in power play success, both ranking at a 19.7% success rating with the man advantage, although Pittsburgh does hold the slight edge. On the penalty kill, the Penguins are one of the best in the league, ranking 3rd among all NHL teams with a 87.8% success rating and 11 goals shorthanded.
Advantage: Pittsburgh

Prediction: There is little doubt that this is going to be the series to watch in the first round. Two of the league’s best offensive clubs going at it and, oh yeah, did I mention that they hate each other. After several brawls between these two teams during the regular season, it is time to put the money where their mouths are. Pittsburgh is healthy, their scorers are scoring and Sydney Crosby has picked up right where they left off. Philadelphia has the weapons to beat them, but is missing a key component in Chris Pronger to their defensive core. With Pronger out of the lineup, Pittsburgh should be able to squeak by the pesky Flyers, although it won’t be easy.
Forecast: Pittsburgh in seven