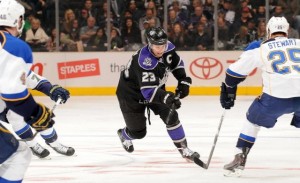 We have two teams with defense on their minds as they prepare to meet each other. Both the St. Louis Blues and the Los Angeles Kings have great goaltenders. St. Louis just happens to have two of them, Brian Elliott and Jaroslav Halak. But Los Angeles’ Jonathan Quick is as good as having two goalies. This will be a big defensive battle, which will likely result in a low scoring series. The Kings surprised the hockey world by defeating the top-seeded Vancouver in only five games. St Louis isn’t going to be so easy. The Blues are constantly moving always, always being at the puck, grinding, grinding, never tiring, never getting sidetracked. It’s guaranteed to tire opponents who are not prepared. The Kings rely on the hit-and-run play, with feistiness, picking out a weaker opponent and hitting that player with force, which is what destroyed the Canucks. It is not an easy way to play against the hard blue line of St. Louis. It will be a test of grit vs. structure, rogue vs. hard-line. We will see which one conquers in the end in this second round. It is guaranteed to be exciting as these powerhouses are set against each other.

2011-12 Head-to-head Matchup: The Kings beat the Blues in three out of four games in the regular season. One of those was a shootout. Aside from one at the very beginning of the season, which was a blowout of 5-0 Kings, all were decided by one point, so these will be close games. Both teams won Round One of the Playoffs decisively, so their adrenaline is pumped, ready for action. Quick vs. Halak or Elliott, take your pick. Quick may be nominated for the Vezina, but both of the Blues goalminders are amazing as well.
Advantage: Even

Offense: St Louis’ second line provided much of the damage against San Jose in the First Round. Andy McDonald is the Blues’ star, having already potted one goals in the playoffs, rising above even those in the first line: David Backes (1 goal), T.J. Oshie (0) and David Perron (1). Combined with Patrick Berglund, no slouch himself at 3 goals, and  talented linemate Alexander Steen, the three have eight goals among them. On the Kings, Dustin Brown, Anze Kopitar and Justin Williams comprise their first, and best, line. Brown has four goals, Kopitar one goal, three assists and Williams four assists. LA’s Second Line has Mike Richards and Jeff Carter, who’s back from a foot injury. If they start to heat up, it could spell trouble. Jarrett Stoll also has a pair of goals. But others in the LA line-ups have to start producing if the Kings want to make it to the next level.
Advantage: St. Louis

Defense: This is where it gets interesting. St Louis’ Defense also produces in the offensive end. Alex Pietrangelo and Carlo Colaiacovo are the Blues’ top pair of defensemen as Pietrangelo has a plus-3 rating and three assists. Second pairing Kevin Shattenkirk and Barrett Jackman and third team Roman Polak with Kris Russell makes an intimidating defense for the Blues. Polak especially can be brutal when angered. Just ask Justin Braun of the San Jose Sharks, whom he pelted in the first round of the playoffs. Los Angeles’ lines list Rob Scuderi and Drew Doughty in the first line. Doughty takes up the most ice time and receives the fewest penalties for the defensive players of LA. Willie Mitchell and Matt Greene are also on the Kings defense, but Greene is more prone to be physical when necessary. The Blues get the advantage here; their puck protection equal to none.
Advantage: St. Louis

Goaltending: There’s no question that the goaltenders are incredible for both teams. I give the edge to LA’s Quick however, just because he’s in the top two goaltenders in the NHL (along with Henrik Lundqvist of the New York Rangers). Both St.Louis’ Elliott and Halak (who was injured for most of the first round) would be great enough for any game anywhere, Quick is just slightly better.
Advantage: Los Angeles

Special Teams: In the first round, the Blues were able to beat the Sharks by killing their power play. The Sharks had the second best PP in the league in regular season and the Blues utterly destroyed it. Their power play was 33.3%, scoring 6 out of 18. The Kings’ power play only contributed three goals, but two of those goals are what led to Roberto Luongo’s benching from the Canuck’s net in Game 2.
Advantage: St. Louis

Prediction: Both teams are tough on defense, this is true. Both teams have incredible goaltenders, this is also true. But, then the changes begin. St Louis practices even skating, like the bees of a hive, they work together, swarming, buzzing, constantly moving, following the puck like nectar, they will not stop. Los Angeles, are more maverick. Their opponent may not necessarily know where they’ll strike, but you can be certain, they will. Dustin Brown & company have tenacity and never want to hear “won’t” or “can’t”, for they have always felt otherwise.
Forecast: St Louis in Six