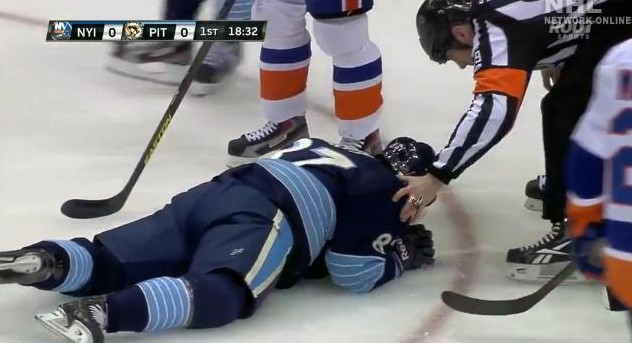 Crosby after getting struck in the face with a puck. He is now out indefinitely. Image via NHL.com

Pittsburgh Penguins captain and NHL-leading scorer Sidney Crosby is out indefinitely after undergoing surgery to repair a broken jaw. Crosby was struck in the face with puck after a shot from teammate Brooks Orpik was redirected during Pittsburgh’s game on Saturday vs. the New York Islanders. The redirected shot caught Crosby below the visor and directly in the jaw, breaking it and requiring the aforementioned surgical repair.

Of course, the Penguins should (in theory) be alright. They played most of last season without Crosby, resulting in an MVP campaign for fellow center Evgeni Malkin and a playoff berth for Pittsburgh. They’ve got Chris Kunitz (20 goals, 44 points), James Neal (18 goals) and Pascal Dupuis (17 goals) to pick up the scoring slack- all of whom are currently in the NHL’s top 10 in goal scoring.

And of course, let’s not forget that the Penguins just loaded up their roster with the acquisitions of forwards Brenden Morrow and Jarome Iginla, the latter of whom is certainly known for his offense. They’re still comfortably atop the Eastern Conference standings with 12 games remaining. While Crosby’s injury does hurt, they’ve still got a world-class talent in Malkin to center the top line. Brandon Sutter will likely be bumped up to center the second line.