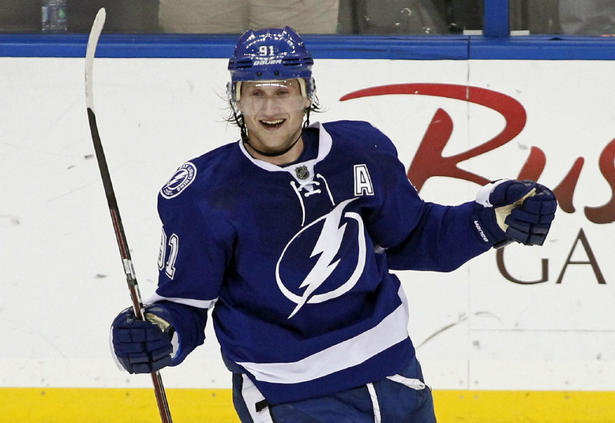 Tampa Bay’s Steven Stamkos is the league’s most dangerous scorer-and he’s only 23. Image via hockeyworldblog.com

With his 21st goal of the 2013 NHL season, an empty-netter to seal Tampa Bay’s 4-2 win over the Philadelphia Flyers, Steven Stamkos, at 23 years, 41 days of age, became the fourth youngest player in NHL history to reach the 200-goal plateau.

Stamkos, the 1st overall pick in the 2008 draft, has become the NHL’s deadliest goal scorer the past few years. After scoring 23 as a rookie, he racked up 51 in his sophomore season, tying him with Pittsburgh Penguin Sidney Crosby for the league lead that year. He scored 45 the year after that, but last year lead the league by becoming the first 60-goal scorer since Alex Ovechkin notched 65 in 2008.

As for the players who reached the 200-goal mark at a younger age than him? They were Wayne Gretzky, Mario Lemieux and Dale Hawerchuk- pretty outstanding company, especially since Gretzky and Lemieux are both in the NHL’s top-10 goal scorers of all time. Gretzky is first with 894, and Lemieux is ninth all-time with 690. Hawerchuk cooled off as a scorer, but is still 19th all-time for total points (1,409).

Just think- Stamkos is already the league’s best goal scorer, and he’s only 23 years old. In ten years’ time, who knows what heights Stamkos will have reached. But for now, let’s just sit back and enjoy watching him light the lamp. Here’s a clip of Stamkos’ 200th career goal, via NHL.com.