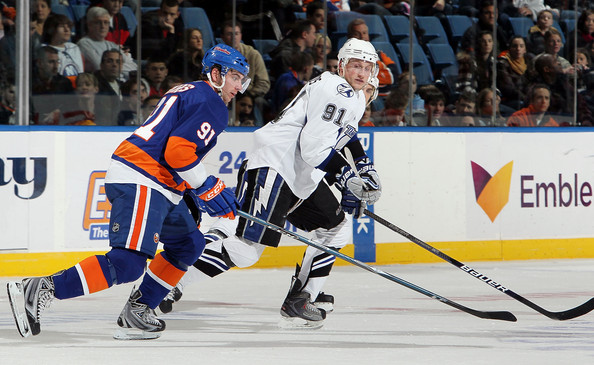 This is a matchup of two players that were picked first overall in back-to-back NHL Drafts (and who both wear #91); Stamkos, who was taken #1 overall in 2008 by the Tampa Bay Lightning, and Tavares, who was taken with the top pick in 2009 by the New York Islanders. Though to this point Stamkos has had the better career, it was actually Tavares who was touted as a can’t miss, next-great-thing, once-in-a-generation prospect, while Stamkos was viewed as sort of the cream that rose to the top of a weak 2008 draft. However, their post-draft careers have been decidedly different than their pre-draft hype.

After a disappointing 46 point rookie campaign, Stamkos has gone on to win the Rocket Richard Trophy as the league’s top goal scorer (an honor he shared with Pittsburgh Penguin Sidney Crosby in 2010, when both notched 51 goals). Meanwhile, Tavares toiled in obscurity his first two years, putting up a respectable, but not elite, 54 and 67 points in his rookie and sophomore seasons (respectively).  Stamkos established himself as the premier goal-scorer in the NHL, having put up 45 goals last year (2010-11), while leading the league this season with 33 goals (as of this writing on February 1st, 2012). Tavares, surrounded with little talent on Long Island, has put the team on his back in the 2011-2012 season, as he currently sits fourth in the league with 53 points in 49 games (one behind Stamkos, who has 54 points). So, if these two players were to enter the draft again, who would get taken number one overall? It may seem like an easy choice at the forefront, but let’s examine:

The Case for Steven Stamkos
He’s an elite goal scorer, with a quick, hard, accurate shot. He knows how to get himself in position, and can also make plays on his own with his speed and puck handling. He’s not a big, physical presence, but he’s everything a team would want on the offensive side of a hockey game. He’s had two 90+ point seasons (51 goals, 44 assists for 95 points in 2009-10, and 45 goals and 46 assists for 91 points in 2010-11), and as mentioned before, he’s won the Rocket Richard Trophy for his goal-scoring prowess.

The Case for John Tavares
Billed as the Islander’s savior, Tavares has done as much as he can for the team, given the tremendous pressure placed on him, as well as the relative lack of talent around him in New York. After two above-average years, he has finally become the elite center he was expected to be. Tavares is a great skater, an incredibly skilled puck handler, and can score goals, but also put his teammates in position to tally. At 6’1”, 206, he’s the same height as Stamkos, but almost 20 pounds heavier, and he knows how to use it. Tavares is a more physical presence, a key factor in forechecking and winning puck battles along the boards.

The Case against Steven Stamkos
There’s no denying that Stamkos is a skilled goal scorer. But he also has a pair of award-winning linemates in Vincent LeCavalier and Martin St. Louis, both of whom are skilled, veteran scorers, and are more than capable of putting Stamkos in position to score, both with their passing, and their ability to shift attention from Stamkos to themselves. Tavares, on the other hand, is the Islanders best player, with no one to set him up or take attention away.

The Case against John Tavares
Tavares just doesn’t have the numbers Stamkos does (yet, anyways). Stamkos has proven himself with a trio of All-Star caliber seasons, while Tavares struggled to put up the kind of production that Stamkos has been able to produce with ease. Tavares also has an abysmal -27 rating through the first two and a half seasons of his career, well behind Stamkos’ -9 (which is no great shakes either).

Final Verdict:
This is a tough one. Again, Stamkos has the numbers, but Tavares is coming along, and has accomplished a lot pretty much all by himself. If these two were to enter a re-draft, they could certainly go one and two. So, who wins? Stamkos’ pure, deadly goal-scoring talent, or Tavares’ well-rounded, “put the-team-on-my-back” style of play?  There is always a place in the NHL for someone of Stamkos’ caliber, an elite sniper who can put up goals seemingly at will. But if the choice had to be made, Tavares might be the better player, if just by a hair. He doesn’t have Stamkos’ ridiculous goal-scoring talent, but the fact that Tavares can do so much with so little in New York, while playing a great, well-rounded game that now has him producing just over a point per game, one has to think that Tavares would be the better centerpiece for a franchise, with his combination of skill, playmaking, leadership, and his ability to raise the play of those around him.