Believe it or not, it is not a certainty that NHL players will be included for participation in the 2014 Olympics in Sochi, Russia.  Since the 1998 Nagano games, hockey fans have been spoiled in watching what amounts to a World Cup type competition with the world’s best hockey players lining up behind their flag in a knockout round that has been the highlight of the games as well as the toughest ticket.  All four finals have featured regional rivals, with Canada vs. United States (2002, 2010), Finland vs. Sweden (2006), and Czech vs. Russia (1998).

As we are now less than 365 days until the opening ceremonies in Sochi on February 7, 2014, common wisdom is that the NHL, NHLPA, and the IOC (and IIHF, International Ice Hockey Federation) will come to agreement, but it’s not settled yet.  And unlike other major sports lockouts, it’s not about money. Bob McKenzie of Canada’s TSN commented:

“A better deal doesn’t mean a better monetary deal.  It means better access to the players. The use of images, the use of video, things like that — as well as accommodations, tickets and the NHL and NHLPA basically being treated as if it was a major sponsor of the Olympics.”

It should also be noted that Alex Ovechkin is already slated to be a torch bearer, talk about awkward if this doesn’t come through.

I leave you with snapshots of Olympics past, and hoping for similar memories this time next year! 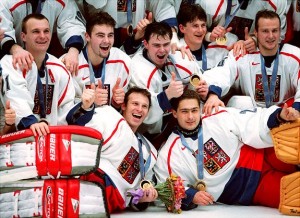 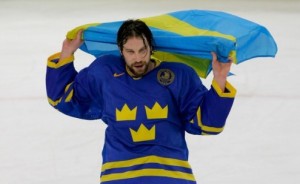 Forsberg carries the Swedish flag to gold in 2006 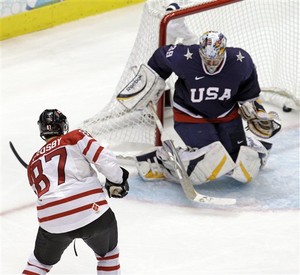