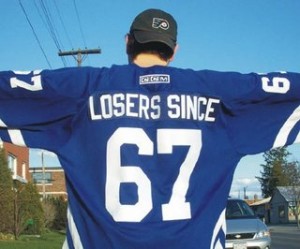 In what has apparently become a spring tradition, the Toronto Maple Leafs fans have already grown weary of their team’s fortunes, and began to look to the summer.  As occurred last year among distraught fans, Toronto Maple Leafs fans were heard chanting “Let’s go Blue Jays” as they suffered through a 7-goal barrage against two goalies, including a blown 3-1 lead at the halfway mark of the 2nd period.  This was the teams second loss at home against no wins, combined with the labor strife, it’s safe to say, “the (Toronto) natives are getting restless).  It could get worse, the Leafs have more wins than the Washington Capitals, Detroit Red Wings, and Stanley Cup Champion Los Angeles Kings combined (Kings playing late this evening).  Via the AP summary:

Toronto (2-2) fell to 0-2 at home after a solid 5-2 win in Pittsburgh on Wednesday night. Frustrated fans chanted “Let’s go Blue Jays” with 2:40 remaining.

At least this year, the Blue Jays are literally odds-on favorites to win the World Series, which is an unusual position, since they haven’t as much as made the playoffs since 1993.  Combined with the Toronto Raptors playoff drought since 2008 (no series wins since 2001, their only series win), and the Leafs own drought since 2004 (in a league in which more than half the teams make the playoffs…ouch).  It sure makes it tough to be a fan of Toronto sports.  Except for the Grey Cup Champion Toronto Argonauts Football Team!