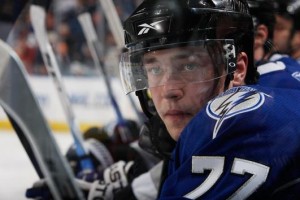 Victor Hedman has been one of the best defenseman so far in the 2013 NHL season. Image Credit: Associated Press

Two years ago, after his entry-level contract was set to expire, the Tampa Bay Lightning rewarded, no, gave Victor Hedman a five-year, $20M contract extension. At the time, Hedman hadn’t done much to deserve such money, but the Lightning had faith in the man they’d used the second pick in the 2009 draft on.

The move was questionable, to say the least. Four million per year for a player whose offensive game was below average (46 points over the course of his first two NHL seasons) and whose defensive skills (career +/- was a flat 0 after his first two years as a member of the Lightning) weren’t exactly shut-down level? Was this a face-saving move by Tampa Bay, trying to prove they hadn’t wasted the second overall choice back in ’09?

Or, perhaps the Lightning knew what they had in the 6’6″, 235 pound blueliner from Ornskoldsvik, Sweden (if that town sounds familiar, maybe because of its other notable hockey products: the Sedin twins, and that Peter Forsberg guy), even if they knew they’d have to wait to reap what they’d sewn. Hedman did struggle in the first year after receiving the extension. He showed no offensive improvement, notching the same level of point-production he had his first two years (23 points, five goals and 18 assists in 2011-12) and his defensive game appeared to regress (-9 that same season).

But this year, Hedman has exploded out of the gate. He has five points in seven games (two goals, three assists) and is second in the NHL with a +10 rating. He’s also third on the team with 13 blocked shots so far this year, and has been playing like a true shut-down defender. The Lightning are off to a incredible start to the season, having gone 6-1-0 to kick off 2013  and grab a stranglehold on the Southeast Division. Their improved defense, led by Hedman, is a big reason why. Tampa Bay is tied for 11th in the NHL with only 2.57 goals allowed per game; last year the Lightning were dead last in the league with a 3.39 goals-allowed per game clip. The big Ornskoldsvikian is only 22 years of age, and if he continues to grow as an all-around player, he could soon easily find himself mentioned as one of the elite defensemen in the NHL.