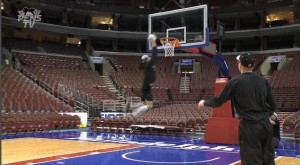 It’s been a pretty good year for rookie Pittsburgh Penguins defenseman Robert Bortuzzo. He scored his first NHL goal back in February, and then there’s this little gem of a video clip. He and some teammates are getting some shoot-around time at an empty Wells-Fargo Arena (home of rival Philadelphia Flyers, and the NBA’s Philadelphia 76ers), and then the 6’4″ Bortuzzo throws down an alley-oop dunk. Tough to tell what’s better: the dunk, or the hysterical reaction from his teammates. Decide for yourself: