It would seem inconceivable for any owner to be bad seeing that it takes more than luck to fall into millions upon millions of dollars to buy a team. Granted, a lot of these owners started running their respective teams back during the Cold War era when it cost $28.54 to buy a team (kidding). Most of these owners have proven their smarts and worth in other areas of life to be successful enough to purchase a franchise. So this makes it all the more baffling that there are owners out there that couldn’t manage a McDonald’s, yet they’re running a million dollar franchise.

The premise is going to be set on three divisions we’ll call the Milwaukee’s Best Light Division (not so good owners,) Keystone Ice Division (bad owners,) and Natural Ice (Idiots.) Let’s start with the Beast… 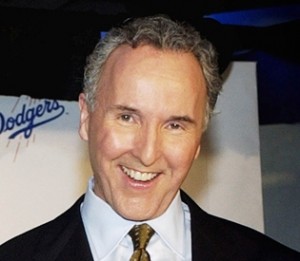 Frank McCourt fits in good here. It’s tough to say he’s a horrible owner because his teams were competitive while having winning records 5 out of the 7 years he was at the helm. McCourt obviously had some issues that created a mess and not just financially. He clearly didn’t have enough security at his stadium during the fight that left a Giants fan severely hurt with brain damage. Add this to allegations that he used money from the teams charity, he has created a nice niche’ in the financially bankrupt world. Rumors of his gambling problems also aren’t a surprise.

Bud Adams probably doesn’t deserve to be in this category, seeing that his teams have been pretty successful. But after this incident where he flipped off Buffalo Bills fans while  dancing, the old man clearly has lost his mind! Actually, I loved it. Gramps Adams is rich and old and was rubbing it in a little. Who cares, right? Still his handling of Houston, in which he micro-managed and took the teams fans on an emotional rollercoaster after saying they’d stay if a $67 million  renovation was approved. He then up and left 10 years later. The ending of the Jeff Fisher era and Vince Young debacle clearly wasn’t his most shining moment. Adams probably needs to hit up a retirement home and sell the team. 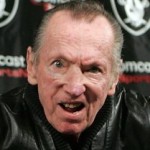 Al Davis, (aka Darth Vader) has clearly lost his team and his mind. Not to sound like everyone else, but is the old man even living? The only reason he’s not in the worst category is because of the rich history and success he was responsible for, or at least fueled. Several times he has sued the NFL. This astonishes me. Could you ever imagine suing your employer several times? I’m pretty sure you wouldn’t still be gainfully employed through them. Davis goes after the contracts of his OWN players when he feels they don’t perform to  expectations for Christ sakes! After their 2003 Super Bowl meltdown against (you guessed it) former coach Jon Gruden, the Raiders have been catapulted into purgatory hell. Maybe that’s where Al needs to go.

Honorable Mention: Jerry Jones, Art Modell, Jerry Reinsdorf. They have much more baggage but at the end of the day, their teams have won championships and generally put a winning product on the field

Daniel Snyder wants his teams to win, he just goes about doing it the George Steinbrenner way (he may be unaware 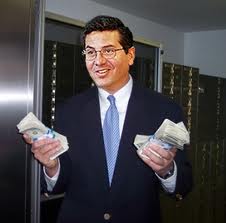 that football has a salary cap.) Looking at Snyder, he’d be one of the last people I would want running my football team. I feel like he’d be more fit to play some Criquet with the dutch and dutchess of Cambridge more than find smart football guys. I mean he went back for Joe Gibbs! I was unaware he was alive. Add the Albert Haynesworth debacle to his resume and it’s clear Danny’s out of his league.

The Steinbrenner brothers have to be amongst the top of unintentional comedic owners. The story lines are all there, rich kids grow up and take over dads empire. Yup, Hank and Hal both got the keys to the car without earning it, and now drive around like they’ve conquered Rome.  Fellas, don’t try to be your dad please.  Toss in they insulted Joe Torre for not wanting a crappy one year deal, after all he did for the franchise  they surely are the spoiled kids that say whatever they want and get away with it.  The worst may be their decision against the wishes of general manager Brian Cashman to sign Rafael Soriano. In return the Yanks now surrender their number one pick in June’s draft. Yup, all of this for a set up man who’s pitched 15 innings thus far. I’m kind of excited moving forward with these two hacks running the show. No telling what will come out of their mouths. 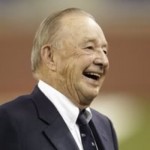 William Clay Ford may be the worst owner out of them all. It stinks we have no real asinine quotes from this guy. His team has been the first to go winless in an NFL season. He’s been at the helm over 45 years and the Lions have qualified for the playoffs only 9 times. Easily could be in the “Idiots” owner club, and probably should be.

Honorable Mention: David Glass and Mike Brown, both should be in one of these categories but selecting three for each group makes for tough decisions. 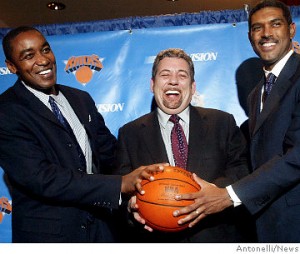 James Dolan is the biggest clown out of the group. His addiction of having Isiah Thomas being constantly around the franchise is baffling to not just Knicks fans, but fans as a whole. His business decisions haven’t mounted too much either. Parallels to the Steinbrenner clan, Dolan inherited Cable vision. He invested in the Wiz electronics and that failed him to the tune of 250 million dollars. He ruined the New York Rangers as soon as he saw an increased role. We don’t even need to go into the catastrophic events that happened to the Knicks while on his watch. Christ, James Lorraine Dolan even had a hand in the Anucha Browne-Sanders harassment lawsuit. All this and we didn’t even mention his drug addiction the decade prior. Dolan seems like he’d be a riot out at the bar, but that’s probably not somebody you want running your multi-million dollar franchise.

Peter Angelos has all the smarts, it seems, to be a great owner. Peter was an outstanding lawyer in which he made his fortune. Unfortunately this hasn’t really translated to the diamond as Angelos has been an idiot in the owners box. For all the money he has made he complained that the high hotels overseeing the stadium was stealing from his product because they could watch the game without paying. Ugh, Angelos, who the hell wants to watch a game that far away? You would have to use binoculars for crying out loud! Not to mention most of his money spent has been spent foolishly. This once proud franchise has sunk and Peter AngeLOSE has been voted by several outlets as the worst owner in sports. Pete, your 82, time to hit the golf course, pal.

Donald Sterling’s Clippers teams have had 13 top 10 picks the last 20 years not including this years number one  pick they traded prior to the draft to the Cavs. Yup that pick turned out to be the number one overall pick of the draft. What has this all amounted to? You guessed it, nothing. Donny even barked junk at his own player Baron Davis from courtside seats! Yes, Don is really in his own league of idiot owners. Being called a racist doesn’t surprise either. His reluctance to sell the team has fans confused. The Clippers are a perennial laughing-stock of all sports. Sterling even had to pay former coach Mike Dunleavy 13 million dollars after failing to pay him his rightful salary. Apparently this isn’t the first time Sterling hasn’t paid an employee after firing them.