On March 12th, the NFL announced that the Dallas Cowboys and Washington Redskins were docked a combined $46 million in cap space this year, due to the dumping of money in an un-capped year, which technically wasn’t illegal due to the rules at the time. The rest of the owners knew there was going to be a cap, and played the rules fair, handing out decent contracts that would meet CBA compliance. The Cowboys and Skins played the game a little different, loading up contracts in a year where the money didn’t matter, thus being able to afford more once the cap took effect.

While there was no gentleman’s agreement or handshake made on the system, both teams technically followed the rules in the book. All contracts were signed, and sent to the league office for approval, and were ultimately given the green-light to proceed.

Fast forward a year later, the NFL Management Committee handed down the $46 million punishment to both teams, causing a confusing message with how it was all handled. They were approved for what they did, yet were punished for it in a big way after the dust settled. 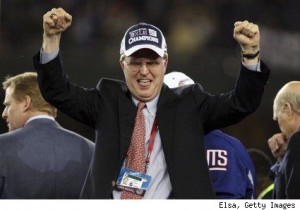 What’s intriguing to me, is that the Chairman of the NFL Management Committee, John Mara, also happens to be the CEO and Co-Owner for the New York Giants, and he was the one that pushed the disciplinary actions forward. When the Redskins and Cowboys filed a formal grievance to have the issue handled in arbitration, John Mara had this to say:

“I thought the penalties imposed were proper,”  Mara said. “What they did was in violation of the spirit of the salary cap. They attempted to take advantage of a one-year loophole, and quite frankly, I think they’re lucky they didn’t lose draft picks.”

Of course, the other owners in the league agree with the cap hits because in this weeks owners meetings, 29 of the 30 eligible owners voted in agreement on penalties imposed.

But am I the only one that finds it a little odd that an owner from the same division wanted these two teams penalized when there were other teams that did the same thing? Of course, the Raiders and Saints did not free-spend like the Cowboys and Redskins, but in theory they paid a bunch of up-front cash and played the system a bit too. Why did Mara only want to target his NFC East rivals?

Mara was also quoted after the formal grievance was filed saying that the teams would not win their cases.

At the owners meetings, an executive of the Redskins was asked about the situation, his response was simple. “Ask John Mara”.  When Jerry Jones was asked about it, he said “I would like to settle this on the field”.

Maybe it’s just me reading a bit too far into this thing, but it’s going to be interesting to see how it all plays out.