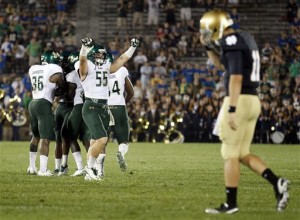 What is going on in South Bend? Every season, analysts and a few promising players give Irish fans a glimmer of hope; that glimmer quickly fades with sub-par performances and losses to teams a top-20 squad should beat.

Why is that? Quite obviously, it’s because they haven’t seen national prominence in over a decade. This season, they received a pretty generous pre-season ranking at 16, and have already squandered it with a 23-20 season-opening loss to the fledgling South Florida Bulls. It is this level of consistent disappointment that has hindered the program and continued its downhill slide.

After a five-turnover performance, including three inside the South Florida 10 yard line, I have to wonder why these guys were not mentally prepared. In youth football the first thing they teach you is to take care of the football. I also wonder why QB Tommy Rees wasn’t the starter to begin with, he showed last year he has a lot of promise, and proved it again almost leading the Irish to the comeback win. Dayne Crist hadn’t shown he is better than Rees and definitely doesn’t have his upside, so why coach Brian Kelly went with Crist to start the game is a mystery to me.

I understand anything can happen, especially in college football. But I’m not going to sit here and say “it’s ok.” I’ve done that for ten straight seasons. I am not going to make excuses for them, and say “despite the loss we had some positives.” When you’re ranked 16th and are supposed to be returning to the ranks of the elite, please spare me the moral victory nonsense. This game clearly showed they are not a top-twenty caliber team, and Brian Kelly has much further to go than everyone thought before they are back on the winning track.

I am also confused to how the defending National Champion Auburn Tigers were ranked 23rd, yet this Notre Dame team catapults to 16th. That may have put expectations much too high for a team that isn’t as talented as initially thought or can’t handle the pressure of being “good” again. By the way, Auburn came back and won their game with almost a whole new cast on the field, scoring two touchdowns in the final three minutes to shock the impressive Utah State squad. That says something in itself, ND is supposed to have all this talent and upside, but weren’t as mentally prepared or ready to play as an Auburn team with a plethora of new faces. I’m not sure where the blame falls, but it is damn disappointing.

RB Cierre Wood and WR Michael Floyd lived up to their hype. Unfortunately coach Kelly and the rest of the squad didn’t 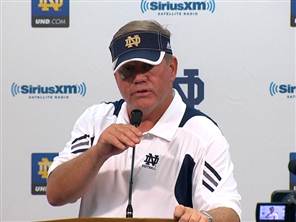 fit the bill, and I refuse to be alright with it. I will cut them the tiniest bit of slack possible, that one of the turnovers was bad luck (a pass that bounced off a receiver’s shoulderpad for an INT inside the 10). But you’re supposed to be beating this unranked team that’s been in existence for less than fifteen years, not blowing it then making up some excuses. That’s been Notre Dame’s niche for, oh, about the last twelve or so seasons. I want a winner and the hype to be deserved, not just hype that produces more mediocrity than Lil’ Wayne’s new album.

When this team goes out and plays with a lot of heart, sharp mental minds and the will to win, I’ll hop on golden bandwagon. But I am one skeptic they’re gonna have to win over, and seeing how they can’t beat South Florida, that may be a tall task. I would be surprised if even some die-hard members of the Irish Nation don’t feel the same.