Anaheim Ducks: 41-year old Teemu Selanne got a standing ovation from the Winnipeg crowd when he returned to his origins last 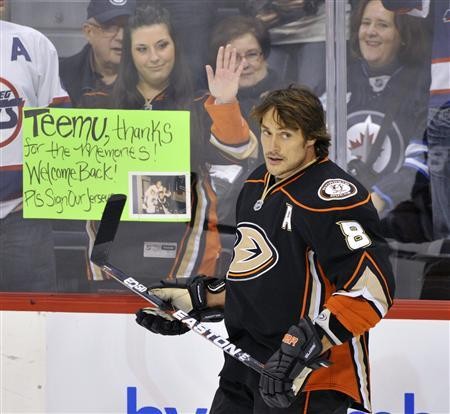 Saturday night as the Ducks took on the new Winnipeg Jets. Selanne was drafted by the old Winnipeg Jets back in 1992, but the team moved shortly after to become the Phoenix Coyotes. This new Winnipeg team, that coincidentally has adopted the same name, moved from Atlanta last year, so Winnipeg fans are rooting for a completely different franchise, a franchise that has no ties to Teemu Selanne! So why cheer for him?

Boston Bruins: Milan Lucic was suspended for one game by the NHL for a hit he made on Flyers forward Zac Rinaldo. He served his suspension against the lowly Montreal Canadiens Monday in Boston. I guess the timing couldn’t have been better as they beat the Canadiens 3-2. Oh, and they put a beatdown on the Flyers last week 6-0. I suppose that Stanley Cup hangover has finally worn off.

Buffalo Sabres: Terry Pegula’s new franchise has been a dissappointment this year, but no one has been more of a disappointment than forward Ville Leino, who signed for a monstrous 6 year, 27 million dollar contract over the offseason. Leino has three goals and seven assists in 29 games for the Sabres, who have fell to 10th place in the Eastern Conference and have lost their last two games.

Calgary Flames: Flames forward Rene Bourque has been suspended two games by the NHL for his hit from behind on Chicago’s Brent Seabrook. Add him to the list of players out for the Flames, including Matt Stajan, Mark Giordano, and Anton Babchuk. 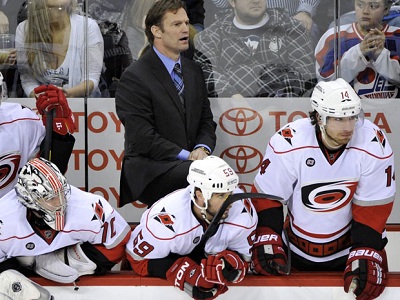 Carolina Hurricanes: Things are looking real bad in Raleigh these days. With the team’s overtime loss to the Florida Panthers last night they have lost 10 of their last 12 games, and sit dead last in the Eastern Conference. As if it couldn’t get worse, Jeff Skinner and Joni Pitkanen are both out with concussions. I guess Carolina have entered the nose-dive competition for the number one draft pick in the 2012 draft. You’re on, Columbus!

Columbus Blue Jackets: Despite playing better in recent weeks, Columbus seems to be unable to make anything successful. They are 3-6-1 in their last 10 games, and have not looked good doing it. I guess Jeff Carter was right not to want to be traded there in the offseason.

Florida Panthers: Wait, the Panthers are sitting WHERE in the Eastern Conference? And how many points do that they have? If you had told me that in September, I wouldn’t have believed you but this team is good, and they are only going to get better.

Montreal Canadiens: Montreal has been a disappointment this season, to say the least. So, they fire head coach Jacques Martin and replace him with Randy Cunneyworth, and Canadiens fans complain that he doesn’t speak french? Really? How about a coach who knows how to win games first.

New York Islanders: I don’t care what anyone says, these are some of the ugliest jersey’s in the NHL: 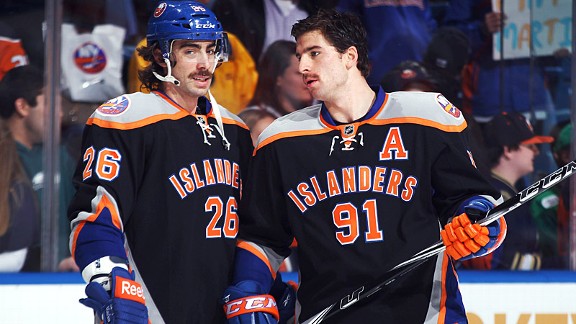 Philadelphia Flyers: Episode 2 of HBO’s 24/7: Road to the NHL Winter Classic premieres tonight. I wonder what new obsession Ilya Bryzgalov will have this week…Ilya Bryzgalov

Phoenix Coyotes: The Coyotes finally traded enigmatic center Kyle Turris to Ottawa for David Rundblad…wait what? How did Don Maloney get that to work?

Washington Capitals: Ovechkin and Backstrom have been broken up, but it’s all okay because the Capitals are better for it. Maybe they’ll get their shit together sometime this season…