After a strong effort from the unheralded Ian Kennedy last night, the Arizona Diamonbacks 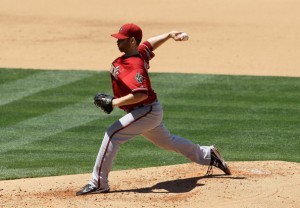 continue their quiet march to the front of the division. They now sit one game back, as every analysts speaks about the Giants as if they’re a sure thing to walk away with their division. Not so fast.

Arizona’s offense is immeasurably better. They can hit at basically every position and a simply decent pitching staff could propel them to big things. Their bullpen issues are finally resolved with J.J. Putz having a big year. Their starting pitching has come out of nowhere, for a team that was supposedly destined for another top 5 draft pick. Ian Kennedy has been a huge surprise to anyone that watched him in pinstripes not long ago. He lines up alongside Daniel Hudson and the newly acquired Jason Marquis to form a solid potential playoff trio.

As for tonight, it’s going to be ace against ace. Tim Lincecum and Daniel Hudson. The Giants continue to scratch and claw their way to 3 run outputs, which has got to weigh on the pitching staff. Luckily, their rotation and bullpen, led by Brian Wilson, are at the top of the league. Their offense is sure to improve, but there’s so many weak spots. Pitching around Pablo Sandoval and Carlos Beltran is about all it takes to avoid anyone hitting over .220 it seems. There’s a reason the San Fran radio crew calls the Giants “torture” to watch. It’s definitely a gritty, grinding version of baseball. We’re talking about a team that tried pinch-hitting a guy hitting .246 last night. There’s not a lot of pop in that clubhouse.

The Diamondbacks are on the other end of spectrum, as Justin Upton smashes home runs to every part of every park. He’s become the most dangerous hitter in the division this year. Now, we get to see if this young Arizona team is ready to take the next step and get big hits against a Cy Young-winning pitcher, in Tim Lincecum. The team tends to lose focus at times, but there couldn’t bigger stage to walk onto in early August.

San Fran should be rocking with their rowdy, eclectic crowd tonight and it will be a good test for a young team to be in that environment with the division up for grabs. This is a statement game for either side, to say the least. And, just maybe, the start of a rivalry.