The Broncos announced today that they had parted ways with starting cornerback Andre Goodman. Goodman was a veteran cornerback who had played his last three years in Denver, but had also played in Miami and Detroit. 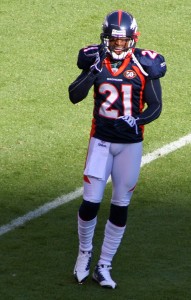 Goodman, who has been in the league since 2002, started every game in 2011, eight in 2010, and all 16 in 2009.  He was due a base salary of $4.62 Million this year but the Broncos decided to release him instead, making him a free agent. Presumably, this was to make room for incoming cornerback Tracy Porter, who was signed away from the New Orleans Saints. Porter will take the starting role that Goodman held if he is not suspended in connection to the “bounty-gate” scandal that is affecting New Orleans right now.

Goodman had 49 tackles, intercepted two passes, and recovered one fumble in 2011.