Home / Uncategorized / No Nicks, No Problem 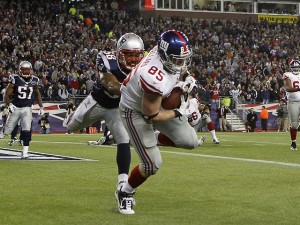 Eli Manning can puff his chest out when he walks around New York these next couple days. He took a ton of heat for calling himself elite in the offseason. Well, how’s stopping the Patriots home streak with a Super Bowl replay-esque drive with Tom once again leaving him too much time?  Looks elite enough to sit pretty in a stacked NFC. Looks like a Giants team from a couple of years ago. The kind of team that took their under-the-radar run to the late season Tundra of Green Bay. Eli Manning just wasn’t this kind of quarterback back then. The team now, is his. And he just got it done without a ton around him.

The Giants are once again unlike any other with the power of their front 4. Jason Pierre-Paul, who some called a luxury pick when drafted, has taken his game to as high a place as Strahan ever did. And he’s got company on the crew. They collapsed Tom Brady’s pocket like only they and maybe Detroit could without a 5th rusher. What other formula for success would you wager trying against Aaron Rodgers? The NFC is not the one-pony-runaway that some talk will have you believe. The New York Giants just made that clear. And “styles make fights.”

New England on the other hand has now lost back to back, a rarity under the watch of the hooded one. And now they go to the greater New York area to play the other team of the city. The Jets and the Patriots meet to break up the new 3-way tie in the AFC East. And the Patriots defense hobbles along. The real story is the offense that seems anything but a juggernaut. The league has caught up with their Welker and roaming tight-end concepts. They lack the big over-the-top threat that Randy Moss used to bring. It starting to smell like smoke and mirrors around Beantown. There’s no run game of any sense and where is the talent? Without another guy of note in the group, it doesn’t seem like they’re built to play poker with teams like Houston or Pittsburgh. At least they only have to deal with Mark Sanchez for this week.