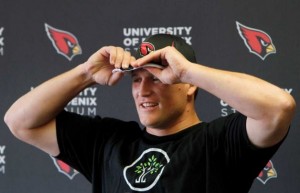 As everyone talks about all the moves the Philadelphia Eagles are making, the Arizona Cardinals are quietly making a ton of moves of their own. They look poised to be back in contention in a wide open division. This as San Francisco has lost their star nose-tackle (Aubrayo Franklin), Manny Lawson, and Nate Clements. The 9ers have added no key pieces besides Carlos Rogers and they’ve recommitted to starting Alex Smith. Up further north, Pete Carroll has given the reigns to Tavaris Jackson to go with plenty of new talent. Both teams, because of their shaky quarterback play, cannot be counted on as contenders. The Rams should be the only shoo-in to return to the top of the standings.

The Red Birds have added players all over the field. Patrick Peterson and ex-Carolina Panther Richard Marshall form the new starting corner duo. Daryn Colledge takes over Alan Faneca’s old spot at left guard. Stewart Bradley fills a void the team has had since Karlos Dansby jetted east. And most notably, the Derek “Incomplete Bullet” Anderson era has ended with Kevin Kolb stepping under center now.

While many give the Eagles the edge on the marquee trade, I’m not so sure. I see similarities in the style and makeup of Kolb to Kurt Warner. Both excel in sliding their feet in the pocket and making touch passes over the middle of the field. Neither are huge in stature and don’t rely on the deep ball, but they read defenses well and know when to check down and make dump-offs. Kolb, like Warner, has translated to big numbers for running backs. I see that soon being evident in the stat-line of 2nd round rookie running back Ryan Williams. He takes over Tim Hightower’s old 3rd down job and offers much more in the open field. Kolb will take risks into tight windows and that means that Larry Fitzgerald should reappear on the map. As Kurt Warner once said, “open for Larry is a lot different than being open for a lot of other guys.”

The Cards have two needs remaining on a revamped offense and defense. Those are offensive tackle (either side) and wide receiver. Cardinal players are currently lobbying for Braylon Edwards, who recently visited. He and Fitzgerald would form a serious duo. Add that to the fact that Todd Heap is now wearing Cardinal red and you’re looking at a downright potent set of options. In the realm of tackles, Flozell the Hotel, Mount McKinnie, and several others are still waiting for work on the open market.

With another piece or two, the Cardinals could go from division cellar back to the penthouse. Rebuilding can be quick when you make this many bold moves.