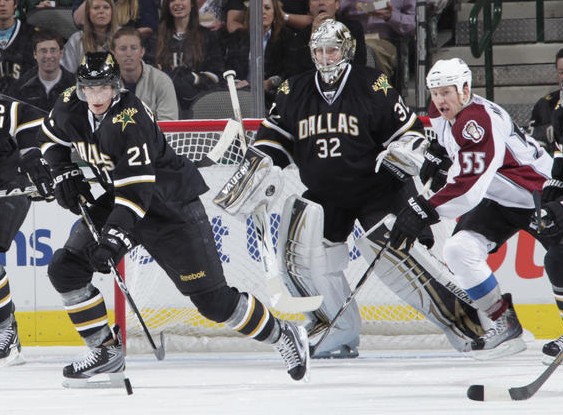 Loui Eriksson (21) and the Dallas Stars overcame a rare poor performance in net from Kari Lehtonen (32) to beat Cody McLeod (55) and the Colorado Avalanche 7-6 on Friday night.

Loui Eriksson scored twice, including the game winner in overtime, as the Dallas Stars rallied for a 7-6 OT win in a wild game against the Colorado Avalanche. And for the first time all season, goaltender Kari Lehtonen was not the reason the Dallas Stars won. In fact, he was the reason they almost lost to a strong Colorado team Friday night; an Avalanche team that came into Dallas with a 6-1 road record and was fifth in the Western Conference standings.

Lehtonen, who is 9-1-0 on the season, allowed six goals on 40 shots, including three uncharacteristically weak goals- one on a puck he should have covered, one on a short-side shot that Lehtonen got a piece of, and another that was shot from behind the net,  bounced off the back of Lehtonen’s leg and into the net. These are weak goals for any netminder, but they are especially bad for a goalie like Lehtonen who’s won nine of his ten starts, has the eighth best save percentage in the league, and has had to make the second-most saves in the entire NHL this season. But the Stars saw that their goalie, who’s amazingly allowed two or fewer goals while still facing 32 or more shots in eight of his nine wins this year, for once wasn’t going to be able to be the reason they would emerge victorious. So, the offense, which was averaging a mere 2.5 goals per game coming into Friday’s tilt against Colorado, came alive.

Dallas scored four goals in the second period, and managed to tie the game three times to send it into overtime with the score knotted at 6-6. Six different players accounted for each of the Stars’ regulation goals, as Loui Eriksson, Sheldon Souray, Vernon Fiddler, Alex Goligoski, Eric Nystrom and Stephane Robidas all put one in the back of the net for Dallas. But, in a game where six goals just wouldn’t be enough to win, Eriksson was the hero, scoring his second goal of the game and eighth of the season, banking a shot off Colorado defenseman Erik Johnson into the Avalanche net for Dallas’ seventh goal of the night, winning the game with just over a minute to play in overtime.

The game was two things for Dallas. For one, a thank-you to Kari Lehtonen, who’s bailed them out so many times this season. On a night when Lehtonen wasn’t his usual stellar self, the Dallas offense said “it’s ok Kari, we’ve got this”, and won them the game. Secondly, this game was a message to the rest of the league. The Stars, who now sit atop the Pacific Division while tied for second in the Western Conference with 18 points in 12 games, showed the NHL that they can win games with goaltending, or if need be, they can go toe-to-toe with a good team like the Avalanche and win by putting seven pucks in the net. Not a lot of teams in the league can do both, but the Stars just showed everyone that they can win any kind of hockey game- something that makes them very dangerous as the season progresses.