Home / Uncategorized / The Future is Bright for NHL’s Islanders, Oilers

For the past several years, the Edmonton Oilers and the New York Islanders, two of the greatest franchises in NHL history, have been an absolute laughing stock. During the 1980’s these two teams were powerhouses, winning a combined eight Stanley Cups in that decade. But long since gone are the days of Wayne Gretzky and Mike Bossy. The two teams have combined for a single playoff appearance in the past five years (the Islanders lost in the first round of the 2007 playoffs to the Buffalo Sabres).  Even sadder is the fact that these two teams have combined for more #1 overall draft picks in the same span of time. The Islanders netted center John Tavares with the top pick in the 2009 draft, and the Oilers grabbed left wing Taylor Hall at the top of the 2010 draft and C Ryan Nugent-Hopkins with the first selection in the 2011 entry draft. Each team has finished in the bottom five of the league for the past two years. These once proud teams have fallen on the hardest of times. But if there is any hope for a fairytale ending for the Islanders and Oilers, it’s that we’ve read this story before. And it was written not too long ago.

The Washington Capitals and the Pittsburgh Penguins have dominated the Eastern Conference the past few years, combining for two top playoff seeds and nine playoff berths in the past five years. But these current powerhouses weren’t always the lethal forces they are on the ice today. Less than a decade ago, they were exactly where Edmonton and New York are now. From 2003-2007, a period of five years, the Washington Capitals and the Pittsburgh Penguins combined for seven bottom-five finishes. But those bottom-five finishes in the final standings meant top-five picks in the upcoming draft. And each team made the most of it.

From 2003-2007, the Penguins had four picks in the top five of the draft. They used those selection to grab All-Star goaltender Marc-Andre Fleury (1st overall in 2003); All-Star and 2007 Conn Smythe Trophy winner (an award given to the best player of the playoffs) C Evgeni Malkin (2nd overall in 2004); Selke Trophy finalist (an award given to the league’s top defensive forward) C Jordan Staal, and of course All-Star center, 2007 Art Ross Trophy winner (given to the league’s leading scorer), 2010 Rocket Richard Trophy (awarded to the league’s top goal scorer) winner, and the player widely considered by many to be the best in the game today, Sidney Crosby (1st overall in 2005). Crosby also won a gold medal as a member of Canada’s hockey team in the 2010 Vancouver Winter Olympics, in which he scored the game-winning goal in the Gold Medal game. This core of players led the Pittsburgh Penguins to back-to-back Stanley Cup Final appearances, losing in 2007 but winning it all in 2008. Pittsburgh hasn’t missed the playoffs since 2007. And off the ice, this turnaround saved the team. They were almost bankrupt in the mid-2000’s, but the on-ice success of the team reinvigorated the fan base, and made it into one of the most profitable teams in the league today. 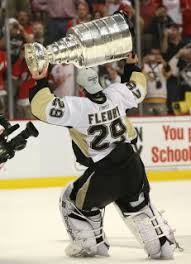 In the same five year period from 2003-07, the Washington Capitals finished as one of the five worst teams in the league three different times (2004, 2006, and 2007). And like the Penguins, they made the most of a bad situation, using the high draft picks they got in each of those years to build the foundation to a dynasty. With the fourth overall pick in 2006, Washington selected Nicklas Backstrom, a Swedish center who has become their top-line pivot and a player who’s finished in the top ten in scoring two times in the past three years. In 2007, the Capitals grabbed Karl Alzner, a Canadian defenseman who recently has become one of Washington’s best defenseman, and completed the 2010-11 season with a +24 rating. Washington’s greatest consolation prize from their years as one of the league’s worst teams came in 2004, when they had the #1 overall pick. With that selection, they grabbed Alexander Ovechkin, a Russian winger who has become one of the best players in the game, and is considered by many, like Crosby, to be the best player in the game. Since he entered the league in 2006, Ovechkin has the most goals and points of any player in the last five years. He won the Rocket Richard Trophy as the league’s best goal scorer in 2007 (52 goals) and 2008 (65 goals). Ovechkin led the league in scoring in 2008 with 112 points, and won the Calder Trophy in 2006 as the league’s top rookie in 2006. Since 2008, the Capitals, led by Ovechkin, have made the playoffs every year, and in 2009 won the President’s Trophy as the team with the highest-regular season points total. 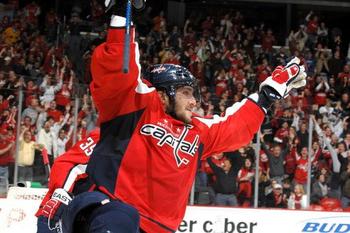 LW Alexander Ovechkin has made the Capitals into the force they are today.

Through a combination of great drafting and good player development, the Capitals and Penguins have become perennial powerhouses after years in the basement of the NHL. And perhaps today’s Edmonton Oilers and New York Islanders will be following in their footsteps. Edmonton has built a strong young core similar to Pittsburgh’s. The two #1 overall picks, Taylor Hall and Ryan Nugent-Hopkins, will be counted on to be the foundation of the team’s offense, much like Malkin and Crosby have been for the Penguins. Other youngsters, like 21-year-old Jordan Eberle (22nd overall in 2008), 20-year-old Magnus Pajaarvi (10th overall in 2009), and 24-year-old Linus Omark (4th round pick in 2007) will be core foundational players in the Oilers’ lineup. In the past three years, the Oilers have started Jeff Deslauriers, Mathieu Garon,  Dwayne Roloson, Nikolai Khabibulin and Devan Dubnyk at goaltender. But now, the 25-year-old Dubnyk, the 14th overall selection in the 2004 draft, is set to take over as the permanent starter after seeing only spot duty in his first few years. That core of six young players, Hall, Nugent-Hopkins, Eberle, Pajaarvi, Omark and Dubnyk, could be what gets the Oilers back to the playoffs and makes them a contender for years to come.

Ryan Nugent-Hopkins, the 1st overall pick in the 2011 Draft, will be a big part of the Oilers' future

The Islanders, like the Oilers, have also put themselves on track for a bright future a la the Penguins and Capitals.  Though the past few years have not been kind to Long Island’s hockey team, John Tavares, along with a young core consisting of Michael Grabner (24 years old), Kyle Okposo (23), Matt Moulson (28), P.A. Parenteau (28) and Blake Comeau (25) are ready to make the Islanders a force. Tavares, 21, led the Isles in scoring the past two years, but the other players are no slouches either. Grabner, a salvation project after he was selected 14th overall in 2006 by the Vancouver Canucks, but cut after only one year with the team, used his trademark speed to rack up a team-leading 34 goals in 2011 for the Islanders.

Moulson added 31 goals last year, while Parenteau and Comeau both surpassed the 20-goal plateau in 2011. Okposo, the 7th overall selection in the 2006 draft, missed most of last year with an injury, but is a season removed from his 52 point campaign in 2009. This is a young team with the talent to become absolutely lethal in the near future. But unlike the Oilers, they’ve found their goaltending situation from outside the draft. New York spent the 1st overall pick in 2001 on goaltender Rick DiPietro, and signed him to a 15 year contract in 2006. But their franchise goaltender has been plagued by injuries since 2008, and he’s only played in 39 games in the last three seasons. But Al Montoya, former first round pick of the Islanders’ cross-town rival, the New York Rangers, has been their salvation. Montoya has stepped into the starting role with ease, and has stabilized the position for the Islanders in the wake of DiPietro’s inability to stay on the ice.

So, while both Edmonton and New York finished as the worst and fifth worst teams in the league last year, respectively, have your laughs now. Look forward to when your team plays them in the near future while you still can. Because if history truly repeats itself, the pasts of the Washington Capitals and the Pittsburgh Penguins foretell a dominant future for the Edmonton Oilers and New York Islanders. 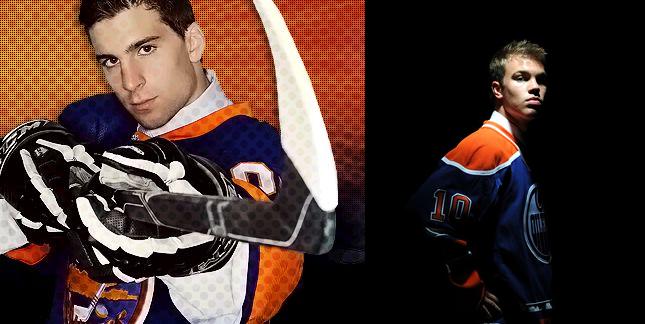 The Islanders' John Tavares (L) and the Oilers' Taylor Hall (R) are set to lead their franchises into the future.