The 2011 Masters tournament kicked off on Thursday afternoon  at Augusta and the field looks tough. This year boasts 93 professionals and 6 amateurs, from a total of 22 countries. 16 golfers attending this year’s Masters are first timers, including the American sensation, Rickie Fowler.

The 2010 PGA tour rookie of the year, Fowler, came under fire recently for his flamboyant attire. Fowler, who sported an all green outfit (pictured), with matching backwards hat was, at one point told, by Augusta National Member, Ron Townsend, to flip his cap back to It’s traditional, brim to the front position. Fowler complied and that was that. Fowler is an up-and-co 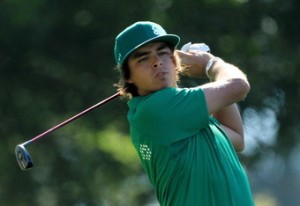 ming stud on the tour and could be on his way to having a very long and storied career on the links. Should the way he chooses to dress come under fire at every turn?

I’m not exactly sure how to answer this question. Golf has a very long-standing set of traditions, one being that golfers dress and present themselves in a very intelligent and distinguished fashion. But, the world has changed, styles change and different forms of dress become more acceptable over time. Maybe Fowler’s fashion has come a little too soon for his critics, maybe he’ll set a trend for years to come. Maybe this type of dress will be the standard in twenty years. Fowler finished the day at -2, which is five behind the leader. Hopefully Fowler let’s his play be the story of the tournament and not his attire.

Tiger Woods started the quest for his 15th major at -1 after the opening day of the 2011 Masters. Woods, who has been out of sorts for the past two seasons is still chasing “The Bear”, Jack Nicklaus, who owns 18 majors (the most of any Golfer). Woods must find a way to get back on track. He suffered an ACL injury in 2008, which was capped off by a very messy and public set of affairs that led to he and his wife filing for divorce. Woods knee seems to be holding up but, his me 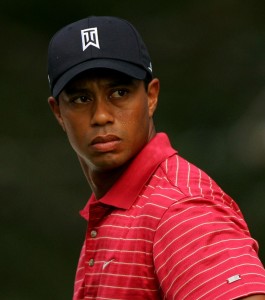 ntal toughness is still in question. Mental toughness is the most important aspect on the PGA tour, if you ask me. Every golfer on tour can play. All of them can drive the ball, they can all make or break a hole with their irons, they can get out of sticky situation with their wedges and they can make us gasp with their phenomenal putts.

They all have it, they wouldn’t be on tour if they didn’t. Mental toughness is what separates the good golfers from the great golfers. Bottom line. The guys who can bury their personal affairs deep down and hit the links without a thought aside from getting the ball to the green and sinking the putt, those are the guys who win multiple titles. They take home majors. They rake in huge endorsements. They are the cream of the crop. Tiger was that guy, he was leaps and bounds ahead of the field, and now he seems to just barely get by. At just 35 years of age, Tiger still has plenty of time to catch Jack Nicklaus, but he must be mentally tough, and right now, he isn’t.

Stay tuned for more action from the Masters!