Basketball and Sneakers go  hand in hand. From the Chuck Taylor days, through the Michael Jordan era, and now LeBron James, kicks have always been the definition of the fashion statement on the court for hoopsters. Whether it be Nike, Adidas, Reebok or even Fila, you have a plethora of shoes to pick from. You don’t want to be seen at the playground shooting hoops with a pair of crappy Spaldings. With so many signature basketball sneakers throughout the years, it was tough to come up with a top 10 of all time. I had my work cut out for me, but I was clutch like MJ. Here is your top 10 NBA  sneakers.

Anyone between the age demographic of 25-35 remembers this shoe as a staple of their childhood growing up watching hoops in the 90’s. Shaq has many nicknames but the Reebok Shaqnosis was one of the first Shaq nicknames. Granted it was the name of a shoe, the Shaqnosis has a unique design that has left an impression in our memories forever.

Wow, where has time gone? FILA and Grant Hill were supposed to become the next big thing. I still remember dudes wearing these on the playground playing pick-up ball. The Italian shoes made a short run during the mid 90’s with Hill, but like Hill’s quick decline from elite, so would these sneakers as they really haven’t been heard from since the Grant Hill days.

Another 90’s NBA star that career was derailed by injuries. Who can forget the  lil’ Penny commercial? Many people forget, but Penny was once a big star that did work even after Shaquille O’Neil left for the Lakers. The shoe, like Penny, were a high point of the mid 90’s and one of my favorites.

Love him or hate him, you can’t hate on Kobe’s kicks. Dubbed the lightest shoe ever, any hoops player can appreciate that by itself. Nobody wants to be running down the court feeling like they have cinder blocks on their feet. Kobe won title number V with these babies on to boot. 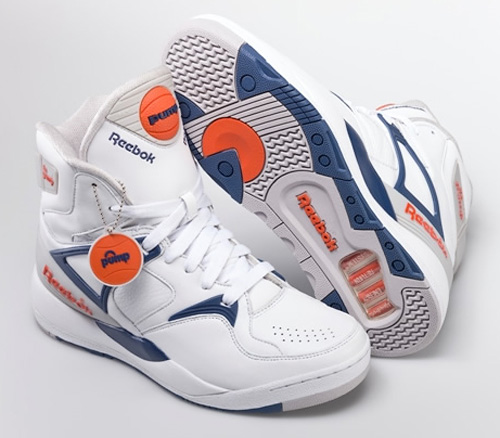 I wouldn’t be caught dead wearing these, but I cannot deny the nostalgia it brings. This shoe was huge in the later 80’s and into the 90’s. Everyone thinks glory days of the late 80’s and 90’s basketball when they see a pair of pumps. I’m putting them at 6 on this list for the respect of that generation. Plus I have to admit, if I had a pair of these sneakers, I’d be seen wasting several hours a week playing with the pump on the tongue.

Sticking with the throwbacks here, the Chuck T’s started it all. Hoops back in the Civil War… uhhh… 50’s and 60’s were all about the Chuck Taylor’s. In fact it’s made a fashion comeback on the west coast as several showbiz entertainers have been seen wearing them. For hoops sake, I cannot put these any higher due to the progress we have made with sneakers. Sorry if you’re older than 55 and reading this.

Innovative to say the least. Another Penny Hardaway shoe that is a lights-out creation by the master minds over at Nike. I worship this shoe like so many others. Truly ahead of its time. You know, it’s too bad Penny didn’t have the career his sneakers did. Have we seen this before where a player’s shoes had a better career than the player himself?

The absolute most comfortable sneaker I’ve ever worn. Iverson was my favorite player, and these were my favorite kicks. I swear you could sleep in these things. A true staple of late 90’s hoops and into the 2000’s, you can still see dudes sporting these shoes and not just for hoops.

This is the shoe that is generally said to have started it all. Banned by the NBA, the shoe wasn’t held back at all. Like Jordan, this shoe is a legend. Most people can relate this shoe as the beginning of evolution of sneakers. Still I could not put it number one, because of another Jordan sneaker that was worn by just about EVERYBODY that could dribble a ball.

The best shoe ever. No questions asked in my book. EVERY basketball player wore these revolutionary designed kicks. I still remember watching Iverson play at Georgetown and seeing him wear the Jordan XI’s. Jordan may have a billion pairs of shoes out, but none will ever top this magnificent pair. You cannot top the nostalgia, color scheme, and comfort this shoe will always provide.