Last night’s NCAA Division 1 National Championship looked like a high school game. Seriously. Butler took a 22-19 lead into the half over Connecticut, and jumped out to a 25-19 lead early in the second half, the low scoring due to good defense all all-around poor shooting from both teams.

From that point on, it finally looked like Butler was overmatched after overcoming so many obstacles and capturing hearts across the country in their run to the finals. When you match a mid-major school against a Big East powerhouse, it is supposed to result in a game like we saw last night. And finally, for Butler, that’s how it went down as Connecticut came away with a 53-41 victory.

Every facet of Butler’s game that got them this far faltered on the biggest stage. Team 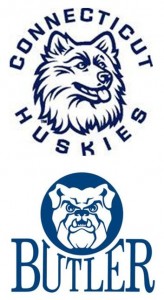 leader and the heart of the Bulldogs, Matt Howard, shot a ridiculous 1-13, while star player Shelvin Mack was a lowly 4-15. The bench didn’t contribute a single field goal, and Butler only made three 3-point shots, overall shooting 12-64. 12-64!!!

Although Butler played as worse as possibly could have been imagined, it is not fair to undermine what UConn did overall this season and this tournament just because the Bulldogs didn’t show up. Throughout the season, they had a tournament record of 14-0 combined in the Maui Invitational, Big East Tournament, the the NCAA Tournament. Bottom line: this

team, lead by guard Kemba Walker, was clutch and tough in its biggest games. And the Butler Bulldogs were no exception to that Huskie magic.

Many former UConn players, such as Richard Hamilton, Hashim Thabeet, and Donyell Marshall, graced the audience. Coach Jim Calhoun, at 68, became the oldest coach to win a title. To think, after the first two rounds of the tournament the Big East was being called “The Big Least” and “The Big Choke” because almost every team the conference sent to the tourney had been ousted. Looks like UConn and the Big East got the last laugh in this one.