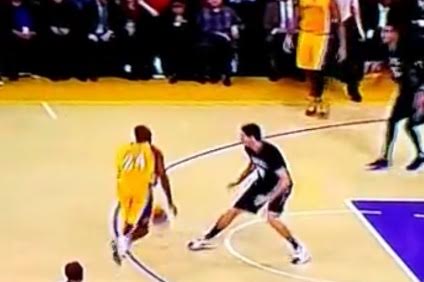 Kobe Bryant kicked off his 20th NBA season Wednesday night in Los Angles by showing two of the brightest and youngest NBA stars how it’s done. Then, for good measure, he put the old man of the Timberwolves, Tayshaun Prince, on skates with a SICK crossover.

In the first video, 19 year-old rookie and overall first round pick, Karl-Anthony Towns, was taken to school by the Black Mamba. But it wasn’t just Towns, Bryant also shook last year’s rookie of the year Andrew Wiggins before he finished over Towns for the kiss off the glass.

And lastly, Kobe put on a double-move crossover before sinking the long jumper. The Black Mamba looks like a young dude out there! We’ll see how much juice he has in those legs come January.

@kobebryant you still got it…#BlackMambaStillHasVenompic.twitter.com/z8699GVgfr